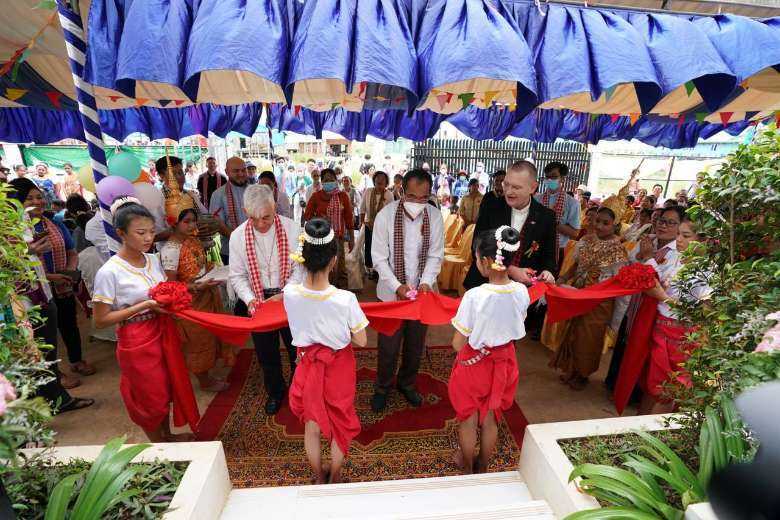 On a bright, sunny morning in early May, dozens of children lined the streets with ready smiles while clapping their hands in Kampong Chhnang city in central Cambodia.

The children, mostly from poor families, gathered to welcome guests including Catholic Church officials for the inauguration ceremony of Providence Primary School. Their parents and local government officials also joined the celebration.

The school, run by a group of Providence nuns, aims to offer free education to children who had never seen a classroom before. Some 108 children up to grade three will also be given free books, notebooks and lunch.

"Today is an important day as Providence sisters have made progress [in a project] which had been put on hold for a long time," Sister Anne Lucie Kim Nga, superior of the Sisters of Providence in Cambodia, said during the ceremony on May 4.

The school draws support from the Catholic bishops of Phnom Penh and Battambang as well as from the governor of Kampong Chhnang province.

Sister Nga noted that before civil war engulfed Cambodia from 1967 to 1975, Providence nuns ran several large schools in Phnom Penh, Kep and Kampot provinces. The war and consequent genocidal rule of the Khmer Rouge dismantled everything.

“They can continue education up to seventh grade in government schools. Even if they stop going to school afterwards, they will have basic education and skills that will be useful for them"

All schools were either closed or destroyed as Catholic missionaries were forced to flee the country to escape persecution by the ultra-Maoist regime. Several nuns, including local and foreign missionaries, were killed by communist forces.

Nuns and other missionaries returned after the end of the war and the overthrow of Pol Pot's brutal regime.

“The school is small but has been built with God’s plan to support the children of poor families,” Sister Nga said.

She thanked generous donors and Bishop Enrique Figaredo Alvargonzález, the apostolic prefect of Battambang, for supporting the nuns to fulfill their mission through the school.

She also thanked local authorities, teachers and parents of students for their active collaboration with the nuns to run the school smoothly.

The school, located in a Catholic parish, was completed in April last year and started enrolling students from November. It has three classrooms to educate students up to grade three in science, social sciences and foreign languages. Students can also learn sports and dancing.

The nuns said the Ministry of Education, Youth and Sports has issued a renewable license to the school for five years.

Sister Bopha Rong, the school's principal, said the school will help students to continue education in government-run schools after they reach grade three.

“They can continue education up to seventh grade in government schools. Even if they stop going to school afterwards, they will have basic education and skills that will be useful for them,” the nun said.

“The livelihoods of these people depended on the water, so as they moved away, they struggled. The children of the Vietnamese community could not even speak the Khmer language"

The students hail from various ethno-religious communities — Cambodian, Vietnamese and Khmer Muslim — and are mostly from poor families who were evicted from the banks of a lake in Kampong Chhnang province a few years ago.

“The livelihoods of these people depended on the water, so as they moved away, they struggled. The children of the Vietnamese community could not even speak the Khmer language, and the same applied to the Khmer Muslims,” Sister Rong said.

Sister Rong said the school has a plan to introduce a night session to educate illiterate adults.

Yin Ven, the chief government officer in Kampong Chhnang city, thanked the Catholic community for their efforts in developing Cambodia.

"Today I am very excited and thankful to see some of you flying from the United States to help the people of Cambodia. Cambodia needs lots of help because it has gone through a long war. Cambodia will accept help from everyone,” Ven said during the inauguration event.

Mai Khanh Tran, chairperson of International Humanitarian Missions and a donor to the school, said the charity is “blessed” to partner the nuns in the school project.

“During the Covid-19 pandemic, everything was shut but construction went on. It is amazing to see the new building. It is a blessing,” she said.

Bishop Alvargonzález extended his gratitude to the nuns for their untiring efforts to support poor rural families.

"I would like to thank Providence sisters who have been always active to go out to everywhere in the villages and address the needs of people. I am glad that they do this in order to proclaim the Gospel and work with the government to build peace," the prelate said.

“Besides learning the national language, children are now able to do mathematics and they have received moral formation. I am happy that they are advancing steadily”

The bishop called on children to attend the school regularly, listen to their teachers and practice at home what they learn from the school so that they can become good human beings who are honest and compassionate to others.

"I wish you, my children, to bear the fruit of knowledge as you grow. We will all work together to build a truly prosperous and peaceful nation," Bishop Alvargonzález said.

Noy Si-On, mother of a student said it could be impossible for her poor family to offer basic education to her daughter without this school.

"Providence sisters' school provide all things including school materials. This is a great help because our poor family is unable provide these to our daughter. I am so happy that my child can now read and write. I hope when she completes education, she can get a job and can support me and the family," Si-On said.

Choun Chanda,1a 15-year-old student from grade three said that she can now read alphabet and learned social science and mathematics after attending the school over the past few months.

Chan Kunthear, another student from grade three said she is happy to get moral lessons in the school that helps her become a good person. Besides, she is also delighted to learn Khmer language.

"I have learned to speak Khmer better than before. When I grow up, I want to learn make up and hair design skills, so I can work in a salon to get income for my parents," the 15-year-old said.

Apart from the school, Providence nuns in Cambodia run shelters for poor and orphaned children who study at school, homes for children with disabilities, kindergartens and primary schools.

Such services are crucial in the Southeast Asian nation, which grapples with poverty and illiteracy.

UNICEF says Cambodia has made remarkable progress in education with a high rate of school enrollment in recent years. In 2017-18, about 97 percent of children were in primary school, though the drop-out rate is relatively high.

The education efforts of the government, non-government agencies and charities were dented as the pandemic forced the closure of all education institutes for months, leaving poor children without an education and forcing many to work to support their families.

UNICEF reports that many children fall behind in learning and eventually drop out due to various reasons, such as not being adequately prepared for school due to poverty, lack of nutrition and the learning environment, experiencing poor teaching and learning, and attending school irregularly. Some 55 percent children drop out of school before they are 17.

Despite such a bleak picture, Sister Rong, the school principal, is hopeful about the progress of her students.

“Besides learning the national language, children are now able to do mathematics and they have received moral formation,” the nun said. “I am happy that they are advancing steadily.”

This story was updated on May 16, 2022 to add quotes from students and a parent.