As Filipinos remember martial law, religious superiors warn that a culture of death is being glorified under Duterte 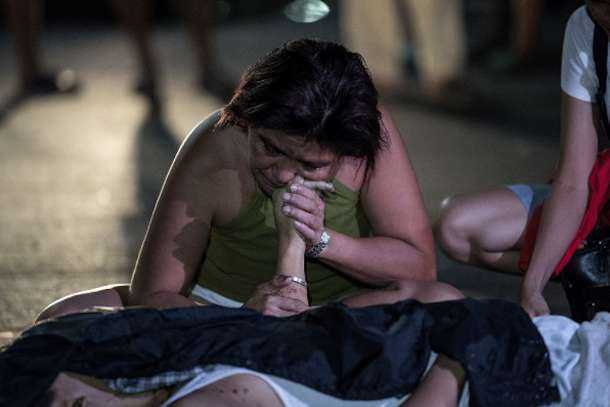 In this 2017 file photo, a woman grieves next to the body of her son, an alleged drug user shot dead during the Philippines’ deadly drug war. (Photo: Noel Celis/AFP)

Catholic religious in the Philippines have vowed to be vigilant against their country moving toward tyranny as they marked the 48th anniversary of late dictator Ferdinand E. Marcos declaring martial law.

The Association of Major Religious Superiors in the Philippines and several rights groups said the anniversary of the Sept. 21, 1972, declaration was an occasion to be wary of dictatorship.

Martial law led to an unprecedented reign of terror. Organizations critical of the Marcos administration were declared illegal, while many were forced to go underground.  It choked freedom of the press, people’s right to credible information and politicized the military and judiciary, the religious said.

Along with others, Catholic religious “raised our voice” against the repression and “our predecessors committed ourselves to be prophets and witnesses to a church of and for the poor,” the statement said.

An estimated two million people took to a street called Epifanio de los Santos Avenue (EDSA) from Feb. 22–25 in 1986, singing songs and shouting slogans against the authoritarian regime of Marcos.

Bishops, priests and religious were among the leaders. Cardinal Jaime Sin and Cardinal Ricardo Vidal were among those who marched with people in the EDSA revolution.

The statement said Catholics participated in the anti-dictatorship struggle as “an exercise of their faith in the saving and liberating power of God who actively works in history.”

“Many of them found the face of Christ in the suffering poor, reinvigorating their faith by actively upholding their prophetic witnessing in the society. Many would later testify that the period of their involvement in the anti-dictatorship struggle was some of the best years of their lives,” the statement said.

“Today tyranny is on the rise again,” they asserted. “We pray to the God of liberation and renew our commitment to serve the voiceless and dehumanized, to a faith that does justice and makes for peace.”

The religious said they are appalled by continuing attacks on human rights defenders. “Our democratic institutions, our freedom of expression, freedom of the press and other fundamental rights are muzzled,” they said without naming any political leader.

“The culture of death is being glorified” with the bloody “war on drugs” that has claimed the lives of thousands accused of being drug pushers or users without judicial processes, they said.

President Rodrigo Duterte started a war on drugs soon after he came to power in 2016.

The administration also plans to bring back the death penalty, while the Philippines is witnessing large-scale corruption committed by the administration’s allies, the statement said.

Critical thinking is branded as “communist” or political opposition. The already narrowing democratic space is “further stifled with the passage of the Anti-Terror Law of 2020, which we demand the Supreme Court declare unconstitutional,” they said.

The statement said “the drift towards tyranny is going to the other side of the pendulum. Now, the Marcoses are trying to rewrite history to sanitize themselves.”