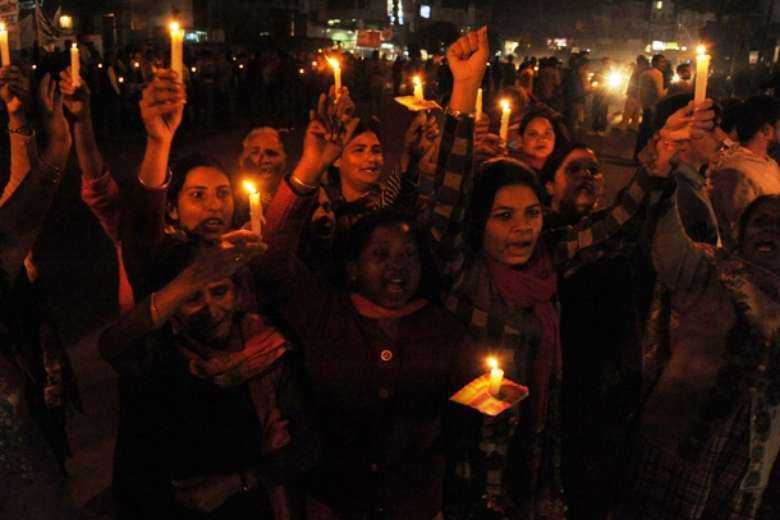 Indian Christian devotees hold candles and chant slogans during a demonstration against a suspected attack on a church in Amritsar on Dec. 2, 2014. (Photo: AFP)

A group of progressive Catholic religious in India have questioned the silence of the official Catholic Church over the continued violent attacks on Christians and other minority communities across the country.

They want the Catholic Bishops' Conference of India (CBCI) to take up the issue with Indian Prime Minister Narendra Modi and Home Minister Amit Shah to ensure immediate action against the perpetrators of hate crimes against minorities.

The Forum of Religious for Justice and Peace, in a letter dated Jan. 10 addressed to Cardinal Oswald Gracias, expressed shock over the silence of the CBCI even as targeted violence against Christians continued unabated in the country.

“During the two days, December 24-25, the media reported seven well-planned attacks on Christian institutions across the country,” while “in the year 2021, there were 486 incidents of violence against the Christian community in India, according to the United Christian Front,” the forum said.

“What shocks us is the complete silence on the part of the official Church, the CBCI.”

If we do not respond to such acts, the secular fabric of India will be lost, causing irreparable damage to the people of India

The letter sought to remind the leader of the Indian Church that the community looked to it for guidance while facing a great threat and living in fear.

The constitutional rights of Indian citizens are being violated both by state and non-state actors, the letter pointed out.

“If we do not respond to such acts, the secular fabric of India will be lost, causing irreparable damage to the people of India, and an inclusive, democratic and pluralistic India as envisioned in the preamble of the Indian constitution could be lost forever,” it further said.

Forum members said that as individuals they had joined civil society groups to register their protest against the gross violation of human rights but the voice of the official church, the CBCI was missing.

“We request you to guide the Catholic community in India to respond to the increasing hate speech and violence against Muslims and Christians,” they added.

Catholics cannot remain "silent spectators" while the violence against minorities unfolded. “The evangelical churches, pastors and the faithful are mostly the vulnerable victims of persecution. As the leader of the Catholic Church, the largest denomination in India, we suggest that you play an important and necessary role of being a bridge between different denominations and towards building Christian solidarity,” the forum members appealed to Cardinal Gracias.

The letter was signed by Father Antony Thekkiniyath Capuchian, the forum’s national secretary, and Sister Dorothy Fernandes, its national convener.

It further urged Cardinal Gracias to direct the CBCI spokesperson to condemn such attacks in public and to constitute an expert legal cell to provide legal and other aid to the victims of persecution.

The forum also called for at least a day of fasting besides other ways of protest. “Let there be united action against the attacks by way of protest rallies, closure of Christian educational institutes, common prayers, etc. We look forward to hearing from you,” it said.

Meanwhile, the bishops’ synod of the Kerala-based Syro-Malabar Church currently underway at its headquarters in southern India has condemned the continued attacks on Christians.

The meeting that began on Jan. 7 has the presence of 57 serving and retired bishops of the Eastern-rite church. “Christian institutions are identified and attacked and a dangerous tendency of violating their basic rights is also on the rise,” the prelates said.

The synod also held that the “implantation of anti-conversion laws in many states in the country is against the secular characteristics of the nation.”

“The Indian constitution has guaranteed a citizen to choose one's religion and any government intervention is a clear violation of citizens’ right to freedom of religion,” said the bishops.

They also appealed to the government to take proactive steps to contain persecution against Christians.

The Sarva Isai Mahasabha, a multi-denominational Christian organization based in Madhya Pradesh state, claimed to have sent 50,000 postcards to Indian President Ram Nath Kovind demanding action against those involved in violence against Christians.

“We want an end to such violence,” the Mahasabha’s national president Jerry Paul told UCA News on Jan. 11. “Our churches are attacked, statues are destroyed and our people are terrorized and restrained from attending prayers and church services.”