Open letter sent ahead of pope's meeting with cardinals 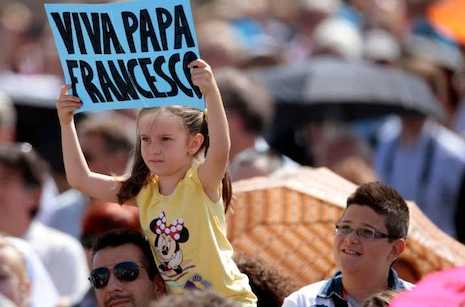 About 100 church reform groups from around the world have teamed together to circulate a petition asking Pope Francis to give Catholic lay faithful an “effective voice” in church decision-making.

The petition, styled as an open letter to the pope, is being mailed to the Vatican Friday in hopes it can impact Francis’ Oct. 1-3 meeting with a group of eight cardinals he has appointed to advise him on the reforming of church structures.

“It is out of a deep concern for the Catholic Church, in the face of its many crises, that we, representing millions of Catholics from around the world, have collaborated in writing this letter,”the writers begin.

“We are filled with hope that church governance will be discussed at your October meeting and we respectfully request that you give primary consideration to acknowledging the rights and responsibilities of the baptized to have a voice of influence in the decision-making of our Church.”

Organizers of the petition told NCR Thursday they’re sending copies directly to the pope, to each of the eight cardinals, and to the Vatican’s apostolic nuncio, or ambassador, to the U.S.

A website dedicated to the effort lists the groups involved as coming from a dozen countries and representing a wide range of concerns about how the church functions.

“We are providing the unfiltered voice of the laity to the hierarchy, to the advisors and Pope Francis,” said Janet Hauter, the chair of the U.S.-based group American Catholic Council, which is one of the signatories.

“We need to act swiftly so that commitments that might be made between Oct. 1 and Oct 3 are not set in stone before they hear what people are crying for,” she said.