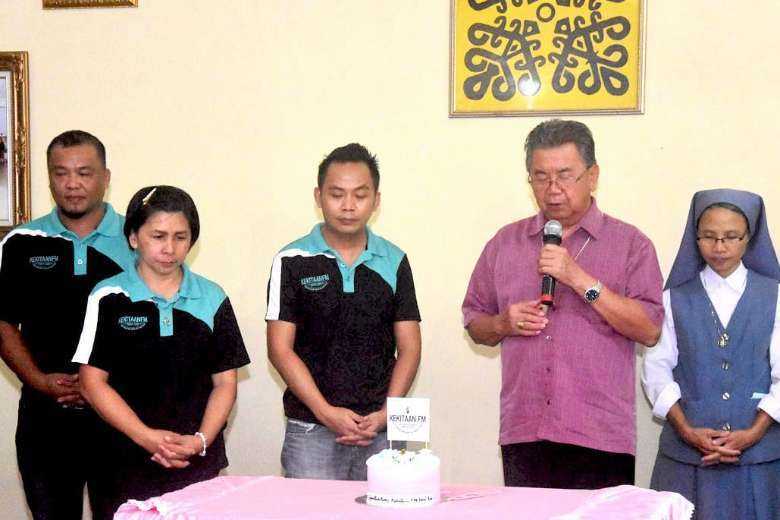 Didroy Joneh was entrusted to oversee all affairs of Kekitaan FM, the online Catholic radio station of the Diocese of Keningau in the northern Malaysian state of Sabah, when it was launched on Oct. 3 last year.

After nearly four months of broadcasting, the young manager of the Malay-language station describes the public response as “overwhelming.”

“I am happy to be a part of a mission to offer the love and hope of Jesus to people through digital technology,” Joneh wrote on Facebook.

The station, sponsored by the diocese’s Commission for Social Communication, was launched with an aim to become a tool for evangelization and pastoral care to faithful who remained confined at home due to the Covid-19 pandemic.

Kekitaan is the Malay word for “togetherness” or “belonging.” With its main focus on spirituality and evangelization, the station runs a host of programs including popular segments like the daily Word of God, non-stop spiritual songs, church announcements mostly from the Diocese of Keningau and news stories picked from reliable outlets.

It also runs a Facebook page that hosts live programs every day where hundreds of listeners and visitors from the diocese and elsewhere interact with the hosts.

In Muslim-majority Malaysia, Christians account for 13 percent of the population, according to a census last year. Two-thirds of Malaysian Christians live in just two of the country’s 13 states, Sabah and Sarawak on the island of Borneo, where they make up a third of the population.

The Diocese of Keningau has about 128,900 Catholics, while Catholics altogether make up about 1.2 million in three archdioceses and six dioceses of Malaysia.

On Jan. 3, station staff marked three months of broadcasting with a Mass and short recollection program at Keningau Diocesan Retreat House to renew and strengthen their commitment to the ministry.

Bishop Cornelius Piong of Keningau and Father Clement Abel, the Commission for Social Communication director, also attended. Each staff member received a gift as a token of gratitude and appreciation.

Sister Bibiana Dunsia from the Daughters of St. Paul congregation reminded the station’s presenters to reflect on their past journey and how they can remain faithful to their mission and vision.

Bishop Piong called on Kekitaan FM staff to become “modern-day prophets” as media missionaries by spreading the Good News and hope to people in the time of the coronavirus pandemic.

“It was the inspiration of the Holy Spirit that sparked the idea of launching Kekitaan FM. Since the government issued a movement control order, the Church was closed and people could only celebrate Mass online. Everyone just stayed at home and many people experienced stress and began to lose hope,” Bishop Piong said.

“Those who listen to Kekitaan FM can get hope to move forward.”

The station is unlike other radio stations as it prioritizes the unity of people with God and the proclamation of the Good News to them, the bishop added.

Manager Joneh says the station can prosper much more as the staff including presenters are very enthusiastic to use their talents to offer hope to people.

While the Catholic station continues its mission of evangelization and pastoral care, Malaysia has declared a state of emergency, for the first time in over 50 years, to contain raging Covid-19 cases that authorities fear might overwhelm the country’s healthcare system.

On Jan. 11, Malaysia’s King Abdullah Sultan Ahmad Shah declared the state of emergency in the country of more than 33 million that has recorded 161,740 cases of Covid-19, nearly half of them since December, and 605 deaths.

However, some political analysts say that the surprise declaration is more a bid by Prime Minister Muhyiddin Yassin to preserve his slipping grip on power in the Southeast Asian nation.