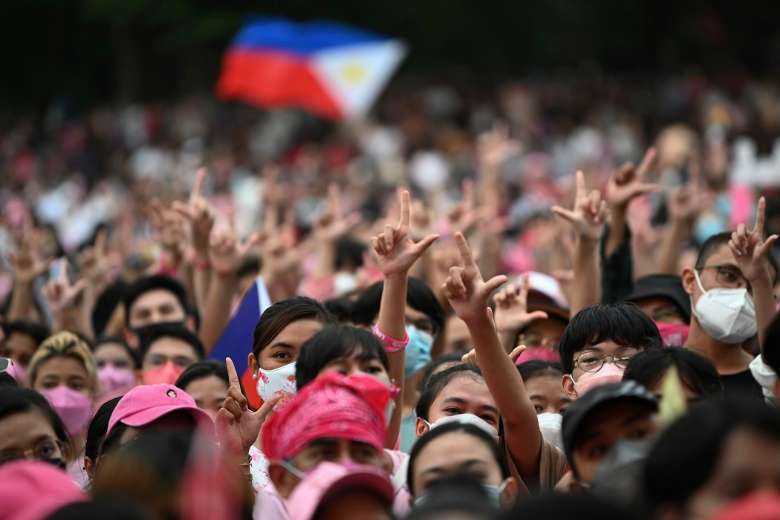 Supporters of Philippine presidential runner-up and Vice President Leni Robredo flash the 'Laban' (fight) sign during a thanksgiving rally inside a university campus in Manila on May 13. (Photo:AFP)

Many are those who experienced repression during the martial law years imposed by the late dictator Ferdinand Marcos, and who are struggling to come to terms that his son, the dictator’s son, Ferdinand “Bongbong” Marcos Jr., won the poll by a landslide.

They fear history could be about to repeat itself.

Marcos, Jr. garnered more than 31 million votes — more than twice the 14.8 million the Church-backed candidate, Vice President Leonor “Leni” Robredo got. The vast majority of Marcos’ supporters were too young to remember the rights abuses committed by his father’s regime.

The group of priests called Clergy for the Moral Choice opened on May 16 its free online counseling service "to talk and to accompany" the stressed.

The service is available to anyone seeking help to address mental distress brought about by the recent polls.

“[Our] online counseling will see volunteers cater to people left distraught by the election,” the group announced on Facebook.

It said volunteer psychologists and grief counselors were available.

The group said handling post-election stress was also “essential” to heal wounds and divisions the election caused between family members and friends.

“Some family members have refused to talk to each other because of politics. Some supported Marcos, others supported Robredo,” Genevieve de Leon, a volunteer psychologist, told UCA News.

“They blame each other for the kind of future the country will have,” she said.

“Some of us even find it difficult to accept the election is over. Those who have already won are still attacking those who lost,” which creates social divisions,  De Leon added.

“It is important that everyone show respect to avoid any further stress and divisions.”

“Many have reached out and many have observed post-election stress in social media as well. Robredo’s supporters were left sad, confused, angry, and anxious because of Marcos, Jr.’s win. They could not understand why 31 million people voted for him,” said a priest from Cubao diocese, who wanted to remain anonymous.

“We are urging the faithful to remain calm and to avoid spreading unverified information that will further exacerbate tensions.”

Manila Archbishop Cardinal Jose Advincula joined that call on May 16.

“At this time, it would be better for all to stay calm and for everyone to believe in the democratic process. Let us continue to love, care, and pray for our country,” Cardinal Advincula said in a post-election message.