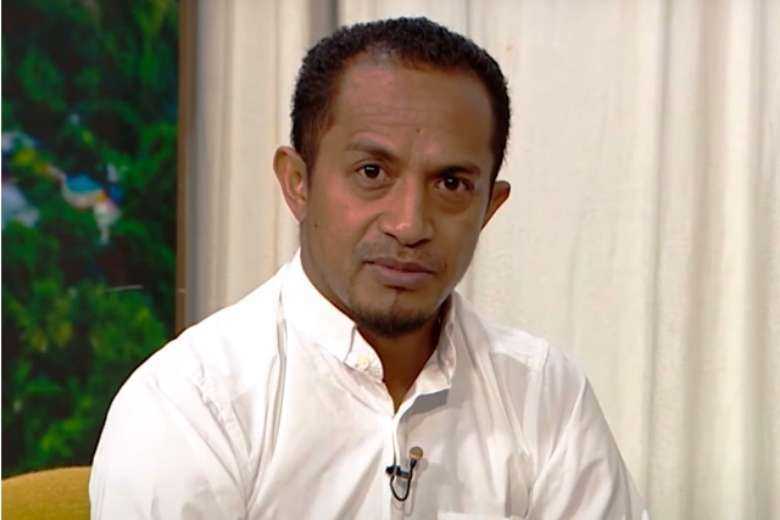 Father Bento Barros Pereira from Dili Archdiocese will be the moderator for the Timor-Leste presidential debate on April 13. (Photo: GMN TV's YouTube channel)

A Catholic priest is to moderate the presidential debate in Timor-Leste as Asia’s youngest democracy gets ready for a second round of voting on April 19.

The appointment of Father Bento Barros Pereira from Dili Archdiocese was announced by the National Electoral Commission (CNE) on April 11.

Father Barros will anchor the debate on April 13, the last day of campaigning, between the two candidates, former president Jose Ramos-Horta of the National Congress for Timorese Reconstruction (CNRT) and incumbent Francisco “Lu-Olo” Guterres of the Revolutionary Front for an Independent Timor-Leste (Fretilin).

“We want an independent person to moderate this debate. That’s why we appointed Father Barros,” Domingos Barreto, deputy chairman of the CNE, was quoted as saying by state news agency Tatoli.

The official alluded to the problems that arose during the debate for the first round on March 15 that forced the CNE to tender a public apology.

One of the issues, Barreto said, was the accusation that moderator Expedito Dias Ximenes did not appear independent enough and failed to allocate a fair amount of time to each of the 16 candidates in the fray.

Barreto said the CNE had decided to broadcast the debate on state-owned Radio and Television of East Timor (RTTL) after technical failures witnessed during the earlier debate relayed by a private television channel.

Speaking to UCA News, Father Barros said “it was an honor, not only for me personally but also for the institution of the Catholic Church where I belong.”

The 42-year-old priest met Archbishop Dom Virgilio Do Carmo da Silva of Dili after receiving a letter from the CNE on April 6. “I met with the archbishop and he has expressed his support,” he said.

Father Barros refused to comment on the first debate except for saying that conducting a debate with 16 candidates could have been a tough challenge.

“I will only try to prepare myself as much as possible to be able to lead as a good moderator of the debate,” he said.

He also teaches communications at several universities including the newly founded Catholic University of Timor-Leste. He was recently appointed national director of the Pontifical Mission Societies (PMS) in Timor-Leste until 2026.

Catholics make up about 97 percent of Timor-Leste’s 1.3 million people. More than 800,000 among them will vote in the presidential polls. The winner will take office on May 20, the day the country celebrates the 20th anniversary of its restoration of independence.