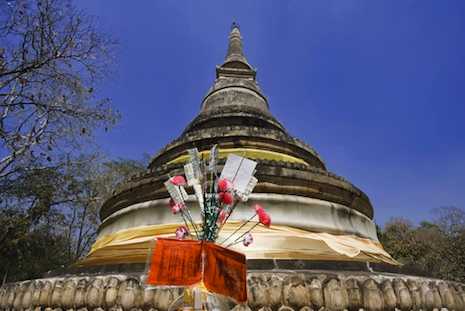 As a Christian, I am comforted by Jesus' assurance that "you may ask me for anything in my name, and I will do it" (John 14:14). But as a theologian concerned with religions other than Christianity as ways of salvation, I wonder whether non-Christians can really pray at all, and whether, if they pray, God would listen to their prayers, since they are not made in Jesus' name. My dogmatic certainty in this matter -- whatever little of it I had -- was shaken by what I experienced in Thailand in June 2007.

I was invited to deliver a lecture at a conference on world Christianity and its encounter with other religions at Payap University, a Church of Christ institution located in Chiang Mai, a city of enchanting beauty in mountainous northwest Thailand. As customary during academic conferences, there was a free day for sightseeing. Participants were given a tour of Wat Phrathat Doi Suthep, one of the most famous Buddhist pagodas in Thailand. King Keu Naone of the Lanna Kingdom built it in 1383 on a mountain, at 1,676 meters above the city of Chiang Mai. Dominating the whole pagoda, which is reached by mounting 309 steps, is a monumental golden statue of a sitting Buddha in serene meditation.

Throngs of pilgrims, young and old, women and men, rich and poor, ritually circumambulated around the statue in prayerful silence, hands clasped at their chests. Others stood in front of the Buddha, incense sticks in their hands, eyes closed, lips murmuring prayers. There was, of course, the usual number of tourists, but the vast majority was pious faithful worshiping in utter devotion. There was none of the hustling and chattering I have seen at Catholic pilgrimage centers and even in St. Peter's Basilica in Rome. The atmosphere was suffused with an awe-inspiring aura of sacredness. I was told that on certain feasts, pilgrims would go on foot, sometimes on their knees, from the bottom of the mountain up to the monastery, a pilgrimage that would take days.

After the conference, I stayed another day to see the city of Chiang Mai. I hiked to another famous pagoda, Wat Umong, just on the outskirts of the city. There were heavy, smoke-spewing traffic and ear-splitting din around the pagoda, but inside the enclosure, there was an eerie peace and tranquility. There were several small pagodas where people came in and out for prayer and a garden with Buddhist proverbs in Thai and English on display on the trees to help the faithful meditate as they walk along the path. Deep silence reigned everywhere on this sacred ground; even birds seemed to cease twittering.

The main pagoda stood majestic and magnificent in the middle of the compound. In it, there were several statues of the Buddha and his disciples, with a huge golden Buddha placed at the center of a high stage near the back. On the left side was an altar on which sat a statue of Quanyin, commonly known as the Goddess of Mercy, whom many East Asian Catholics regard as the equivalent of Mother Mary. As I walked toward it, I saw a young woman sitting in a lotus position at a short distance in front of the statue, her head slightly bowed. Not to disturb her, I moved quietly to the back and sat on the floor some 20 feet behind her.

Intrigued by this figure immersed in prayer, I decided to stay for a while. For nearly three quarters of an hour, the young woman sat, wrapped in prayer and meditation, not a limb twitching, not a turning of the head, preternaturally immobile, like the unrippled water of an autumnal pond, under the loving gaze of the Buddha of Compassion as people walked by. Watching her, I was irresistibly moved to pray -- to the Christian God, Jesus, the Buddha, Mary and Quanyin -- by this Buddhist devotee in an unexpected and strange place.

When I left, the young woman was still praying there, for how much longer I would never know. But I came to understand for the first time -- in the depths of my soul -- what Christians mean when they speak of theecclesia orans, the praying church. That anonymous Buddhist woman embodies, more than anyone I have known, what the "praying church" is.