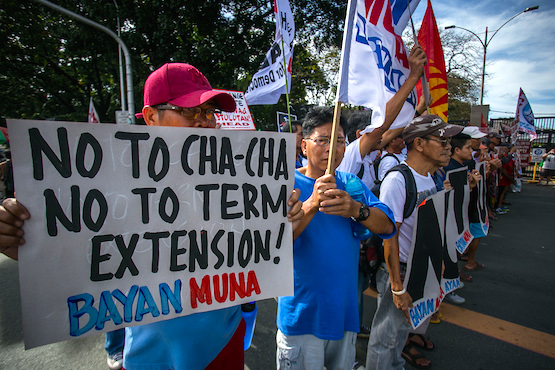 Activist groups hold a protest rally in Manila on Jan. 15 to show their opposition to proposed charter changes. (Photo by Mark Saludes)

A leading Catholic bishop issued a pastoral statement this week protesting the decision of the Philippine Congress to amend the constitution to extend the terms of office of elected officials.

Archbishop Socrates Villegas of Lingayen-Dagupan, former head of the Catholic bishops' conference, said it is "morally objectionable" to rewrite the basic law as a pretext to extend the terms of office of politicians.

He said church leaders "are not unaware that reconfiguring the government may be used by the unprincipled as a pretext for the extension of their terms of office."

The prelate warned that there are elected officials who even declared that the extension of their terms of office are "inevitable and necessary."

In a pastoral statement titled "Pastoral Moral Guidelines for Our Catholic Faithful," the prelate said the church finds the move in Congress "opportunist and downright morally objectionable."

He said circumventing the limits to terms of office established by the constitution "would be a grave moral wrong and a tremendous injustice."

"It is our moral position that if the outcome is to be a credible draft of a new constitution, then the authors who draft the future fundamental charter of the land must be known for their probity and their intellectual acumen," said Archbishop Villegas.

He said those who must rewrite the constitution, if it is necessary, should be "free of vested interests that may render suspect their handiwork."

The former head of the bishops' conference also reminded Catholics of their "Christian duty" as citizens to know the issues. "It is an obligation of believers to make choices for what is truly just, socially equitable and empowering," said the prelate.

The shift from a unitary to federal form of government was one of President Rodrigo Duterte’s promises during his election campaign in 2016. The president said he needed to "reconfigure" the system to give autonomy to the regions. Duterte has issued an order creating a body that will review the constitution and submit recommendations to Congress. He said he has yet to name the members of the body that will be composed of 25 people.

Early this month, congressional leaders announced that they are set to convene as a Constituent Assembly to make amendments to the charter.

Activist groups, however, opposed the proposed charter change, saying that it is an attempt by Duterte to impose a dictatorship.

Renato Reyes, secretary-general of the leftist group Bayan, said the proposed constitutional amendments will only "isolate and disenfranchise" the people and give the president "unrestrained powers."

"Duterte would have both executive and legislative powers during the period before a federal congress can convene," said Reyes. He said it was exactly what the late dictator Ferdinand Marcos did when he made changes to the constitution in 1973.

Nardy Sabino of the Promotion of Church People’s Response said the establishment of federal states will only serve the interest of political dynasties and aristocrats.

"Federalism will not give the power to the people. It will allow political families in the regions to rule and have their own kingdoms and territories," he said.