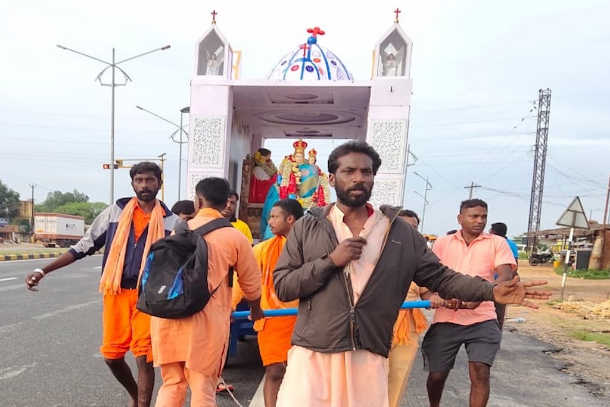 Indian Catholic pilgrims walk to a popular Marian shrine in Velankanni on the coast of the Bay of Bengal. One such team was attacked on Aug. 18, allegedly by a Hindu group. (Photo supplied)

Indian police have arrested six suspected members of a hard-line Hindu group for attacking 40 Catholics taking part in a 450-kilometer pilgrimage to a Marian shrine in Velankanni town in Tamil Nadu state.

The attackers were accused of blocking the pilgrims on a public road on Aug. 18, beating them up and verbally abusing them, said Santhalingam, an inspector at Natrampalli police station in Vellore district.

A Marian statue the pilgrims were carrying in a decorated hand-pulled cart was destroyed in the attack, he told ucanews.com on Aug. 21.

The six suspects have been remanded in custody as police investigate the case. They face charges including attempted murder, rioting, hurting religious sentiments and acting to destroy religious peace.

Officials of the Catholic bishops’ forum in Tamil Nadu said the pilgrimage has been held annually for more than a century.

Pilgrims walk to the renowned Portuguese-built shrine on the coast of the Bay of Bengal to take part in nine days of festivities that end on Sept. 8, the feast of the Nativity of the Blessed Virgin Mary.

The attacked pilgrims, who started their journey from neighboring Karnataka, continued the pilgrimage under police protection, church officials said.

“The attack is an open threat to the constitutional freedom of expression and freedom of movement to a citizen of the country,” said Father Cyril Victor Joseph, director of the communication center in the Bangalore Archdiocese.

“Such attacks are a serious threat to peace and harmony, especially between people of different religious groups. Though the attack was on a small group, the message is for all Christians. It was an open threat against public expression and practice of our faith.”

Christian leaders have been complaining that their people have faced increased attacks from radical Hindu groups since the pro-Hindu Bharatiya Janata Party (BJP) came to power in 2014.

The federal government tacitly approves of radical violence aimed to create a Hindu-only nation, they claim.

“For over a century, people, irrespective of their religion, have taken part in the Marian feast in Velankanni. It used to be a peaceful affair,” Father L. Sahayaraj, deputy secretary of Tamil Nadu Bishops’ Council, told ucanews.com. “Such acts of violence can only spread seeds of hatred among people.”

Groups of Catholics, including women and children, walk for days singing hymns and loudly saying prayers including the Rosary, said Benedict Jaikumar, a local Catholic.

They also take statues and pictures of the Blessed Mary in a cart decorated as a chariot. They use parish churches to rest at night.

Jaikumar, who is connected with the attacked group, told ucanews.com that no one was seriously injured in the attack. The attackers claimed to be members of Hindu Munnani, a radical group, he said.