A woman rides her bicycle through flooded streets in Ho Chi Minh City, Vietnam in October, 2014 (Photo by xuanhuongho / Shutterstock.com)

Is economic growth the enemy of saving the environment? In an international forum on economic growth and environmental sustainability, Catholic leaders and experts in the field argued that rather than being opposed, the two go hand-in-hand, and can lead to greater prosperity all-around.

“There is an increasingly clear harmony between efforts on behalf of the environment and those that promote integral – including economic – human development. This is the ‘human ecology’ to which our efforts must contribute,” he said.

Cardinal Wuerl made his comments alongside a panel of experts during a half-day May 20 conference on “The New Climate Economy: How Economic Growth and Sustainability Can Go Hand in Hand.”

Held at Rome’s Pontifical University of the Holy Cross, the event was organized by the Pontifical Council for Justice and Peace, the World Resources Institute, the New Climate Economy organization and the Embassy of the Netherlands to the Holy See. 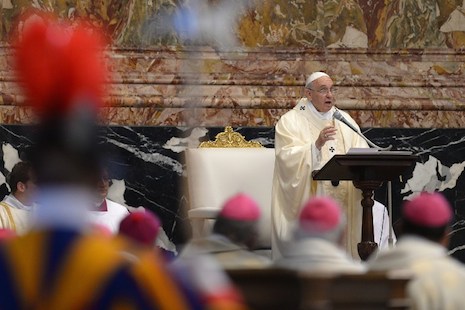 Why is Pope Francis taking so much flak over the encyclical on the environment?

Other attendees were Cardinal Peter Turkson, president of the Vatican Council for Justice and Peace, Prince Jaime de Bourbon de Parme, ambassador of the Netherlands to the Holy See, and experts in various fields of climate and the economy.

In his speech, Cardinal Wuerl said that the need for sustainable development is both “a moral imperative and an economic incentive as a business issue,” and that to commit to taking the task up is “pro-business.”

“Government has a role, and we clearly need strong international agreements. But in moving ahead, business and economic interests necessarily play a significant role,” he said.

“We need to harness that wisdom and creativity in the service of the common good. Such collaboration aligns private and public interests, and reduces the gap between the privileged minority and the world’s great majority.”

He referred to the issue of sustainable development as a “sign of the times,” and said that in addressing it in his upcoming encyclical – set to be published this summer – Pope Francis is following in the footsteps of his predecessors, beginning with St. John XXIII in his revolutionary encyclical “Pacem in Terris” at the height of the Cold War.

Bl. Paul VI also gave heavy attention to the social and political changes of his time in his encyclical “Populorum progression,” while St. John Paul II provided the encyclical “Centesimus annus” as a reminder of the Church’s social teaching amid a time of societal transition, particularly in Europe.

In his encyclical “Caritas in veritate,” Benedict XVI connected fraternal and ecological development, as well as the environment and the development of people and technology, Cardinal Wuerl noted, saying that Francis is continuing their work.

The cardinal also stressed the importance of the role of the Church in the discussion, particularly in providing a moral framework to build on which puts the human person at the center.

In comments made to CNA, the cardinal noted how God created the world and gave it to humanity “to cultivate and to see that that world, which is now the great gift to all of us, is passed on to the next generation.”

“So talking about the environment, and talking about human flourishing and economic development, all go together, under the understanding that we are stewards of creation and that we’re meant to care for one another.”

In his opening address for the event, Cardinal Peter Turkson said that “God has done great things for us” in creating the world and giving humanity charge over it.

However, “we have been poor stewards of creation” and have failed in our obligation of maintaining a planet that continues to nourish and sustains us, he said. He pointed specifically to fossil fuels, saying that if we continue using them “at the current rate, we are on the road to ruin.”

Cardinal Turkson spoke with CNA after his speech, saying that the current dependence of fossil fuels “does a lot of damage to the environment,” and is a key point of contention in the debate surrounding economic growth and environmental development.

“The fear is that calling for climate change and wanting to do something about the climate is going to affect the economy and these sources of energy,” he said.

Rather than calling this fear a threat, the cardinal said that “it’s a challenge,” and that when referred to in this way, it invites all parties to consider the various opportunities that could come from a shift away from such potentially damaging forms of energy.

He recalled how the Industrial Revolution of the mid 17-1800s opened up new avenues for humanity to discover how to satisfy their needs, but that the energy for the growth which boomed during those years was taken from whatever was available at the time.

Now, after more than 150 years of using these sources of energy, “we begin to see the impacts (and) that is where the conflict is.”

While there is dispute on whether or not the environmental impact is real, the role of the Church is to “recognize that whether this is real or not, there is the other side to look at: the human person.”

The primary concern, the cardinal said, is “not just about statistics and graphs, it’s about those who are now being thrown out of their houses, who cannot feed themselves…So that’s why from the point of view of the Church the discussion has never been purely climate and science, but it’s been the human person.”

Cardinal Turkson spoke of the need for an “integral ecology” which takes both the needs of the environment and those of the human person into consideration.

“So (economic growth and development) go hand in hand. If, whatever the environment is, it does not promote to the well-being of the human person we have every reason to see what we can do to improve upon the conditions for the human person. That’s all.”

In his comments to CNA, Cardinal Wuerl said that in the United States, he believes the issue of the environment is something people are “just coming to grips with.”

One of their greatest tasks for the future, he said, will be to help people understand that current issues surrounding the topic “are able to be dealt with in a way that satisfies the needs of everyone.”

Original article: Is economic growth the enemy of saving the environment? These Catholics say no