Bangladesh govt accused of failure to fumigate adequately before monsoon season, resulting in a spread of Chikungunya disease A municipal worker conducting fumigation work, July 12, in Dhaka to curb breeding by the Aedes mosquito that has caused an outbreak of Chikungunya across Bangladesh this year. (ucanews.com photo)

A Catholic Church health spokesperson has accused the Bangladesh government of failing to take adequate precautionary measures to curtail a national outbreak of Chikungunya, a disease spread by mosquitoes.

At least 2,748 cases of the Chikungunya fever were recorded, mostly in the capital Dhaka up to July 13, according to data from the state-run Institute of Epidemiology, Disease Control and Research (IEDCR).

Officials from IEDCR said a torrential monsoon rain and water-logging problems in cities have exacerbated the diseases this year, but no casualties have been reported so far as the disease is not "life-threatening."

Doctor Edward Pallab Rozario, secretary of the Catholic bishops' Health Commission, said the actual number of infections is much higher, particularly in the capital.

"We estimate 35 percent of people in Dhaka have been affected by the Chikungunya fever and the public is suffering to the extreme," Rozario told ucanews.com.

"The Aedes mosquito breeds during monsoon [season], but this year torrential rain and potholes in the roads created during untimely maintenance works have exacerbated the problem," he said.

Further compounding the problem "the government didn't fumigate adequately in time, so mosquitoes were on prowl," he added.

Sayeed Khokon, mayor of Dhaka South City Corporation, appealed to the public not to panic and to refrain from spreading false information and "doing politics" over Chikungunya.

"Within two to three weeks, we will bring Chikungunya under control in Dhaka because the city corporation has deployed the maximum number of workers for such a case," Khokon told reporters in Dhaka, July 16.

However, local residents in Dhaka, who have been affected by Chikungunya, also blame the government for inaction. Ripon Kunda, 36, who lives in the Mirpur area, has suffered with fever symptoms for over a week. 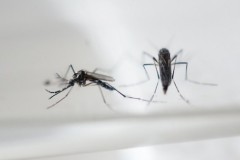 "It's my fourth year in Dhaka and I have never seen the government fumigate in our area. Now, people are angry for the outbreak and the health department and city authorities are blaming each other for it," Kunda told ucanews.com.

"The mayor promised to end the mosquito epidemic before the election but it has been forgotten. Our leaders don't think about our welfare," he said.

Rozario said the spread of "Chikungunya can be prevented if people use mosquito nets while sleeping. But, due to constant power cuts, they have had to sleep outside the nets to avoid heat and may contract the disease."

Caritas has distributed leaflets and published articles in magazines to raise awareness on how to combat the spread of Chikungunya, he said.

Chikungunya is a viral disease transmitted to humans by infected Aedes mosquitoes — the same breed that is the carrier for Dengue fever.

The disease shares some clinical signs with dengue and zika, and can be misdiagnosed in areas where they are common, according to the World Health Organization.

The disease was first recorded in Tanzania in 1952 and it mostly occurs in Africa, Asia and the Indian subcontinent. However, an outbreak in 2015 affected several countries in South and North America.