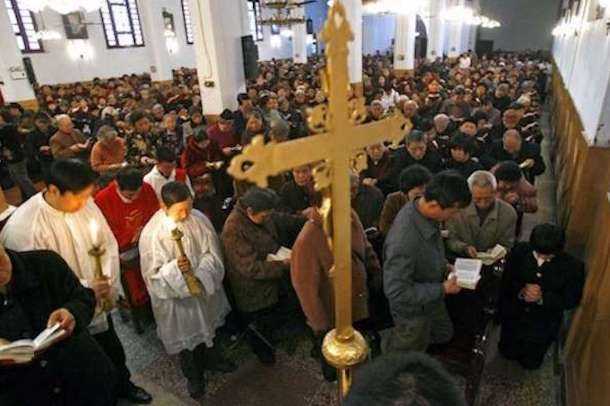 Eight Catholic nuns were forced to abandon their convent in Shanxi province of northern China due to repeated harassment and intimidation by state authorities.

The nuns had been under constant surveillance and decided to leave after authorities issued an order to remove the cross from their convent, bitterwinter.org, a website covering rights violations in China, reported on Nov. 4.

“The cross is a symbol of salvation. Removing it felt like cutting our own flesh,” one of the nuns said. “Had we refused to take it away, the government would have demolished the convent.”

The nuns were also forced to eliminate all other religious symbols including crosses and a dozen statues in the convent.

The nun complained that officials declared them as “dangerous persons” and repeatedly harassed them.

“They asked us to write down what we had done since kindergarten and demanded to disclose everything we did over the past few months. They even wanted us to remember the license plates of the vehicles we used during our trips,” the nun added.

State authorities installed four surveillance cameras to monitor the nuns and visitors in the convent. However, the nuns were able to resist a plan to install cameras in the dining room, kitchen and laundry room.

The nun alleged that three persons — a police officer and two local officials — were assigned to keep track of them.

“They often went inside the convent to inquire about our activities, sometimes at night. The government even hired some thugs and ruffians to harass us. They would get into the kitchen while we cooked to mess around or act lasciviously, inviting us to have dinner with them,” the nun said.

For decades, Catholics have faced abuses and persecution in communist China, which reportedly intensified ahead of the renewal of a Vatican-China deal over bishop appointments last month.

A church in Hebei’s Shenzhou city was shut down on Sept. 3 after it refused to join the state-run Chinese Catholic Patriotic Association (CCPA). Its cross and other religious symbols and statues were removed.

Similarly, an unregistered Catholic church in Youtong village in Luancheng district of Hebei’s Shijiazhuang city was closed on Sept. 3 for refusing to join the CCPA. Statues and the altar of the church were removed under the watch of village officials in front of the congregation before it was sealed off.

Earlier, on Aug. 5, an unregistered Catholic church in Shijiazhuang’s Chang’an district was sealed off by officials.

In May, a Catholic site in Shijiazhuang was shut down for allegedly not having a registration certificate. Despite official pressure to deprive him of the right to celebrate Mass, the parish priest refused to join the CCPA. The uncompromising priest was forced out and now secretly holds gatherings for his small congregation.

“By forcing us into the ‘legal’ churches, the government aims to eliminate our faith, to make all people believe in the Communist Party only,” lamented a local Catholic.