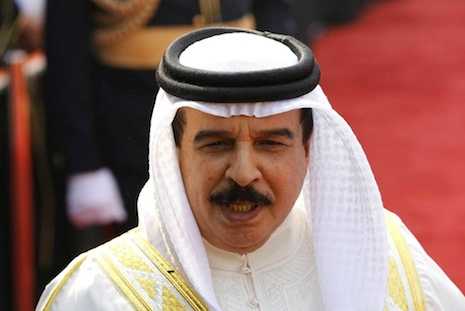 King Hamad bin Isa Al Khalifah of Bahrain has agreed to donate land for a Catholic church, to be called “Our Lady of Arabia” (picture: Boston Globe)

By John L. Allen Jr. for the Boston Globe

From the “not what you might expect” files, here’s a fact about Catholicism in the early 21st century that flies in the face of conventional wisdom: It’s growing by leaps and bounds in the heart of the Muslim world.

Many Americans have heard or read reports about an exodus of Christians out of the Middle East, and in terms of the indigenous Arab Christian population that’s all too real. Christians now make up only 5 percent of the region’s population, down from 20 percent a century ago. In places like Iraq, whole Christian communities are on the brink of extinction.

Yet the Arabian Peninsula today is also, improbably, seeing one of the most dramatic Catholic growth rates anywhere in the world. The expansion is being driven not by Arab converts, but by foreign ex-pats whom the region increasingly relies on for manual labor and domestic service.

Filipinos, Indians, Sri Lankans, Pakistanis, Koreans, and members of other nationalities are becoming the new working poor in some of the world’s wealthiest societies.

The result is a Catholic population on the peninsula estimated at around 2.5 million. Kuwait and Qatar are home to between 350,000 and 400,000 Catholics, Bahrain has about 140,000, and Saudi Arabia itself has 1.5 million.

Despite the triple handicaps of being poor, lacking citizenship rights, and belonging to a religious minority often viewed with suspicion, these folks are trying to put down roots for the faith, and having some surprising success.

Recently, King Hamad bin Isa Al Khalifah of Bahrain agreed to donate land for the construction of a Catholic church, to be called “Our Lady of Arabia,” which will serve as the cathedral for the Vicariate of Northern Arabia. Without a church, the custom up to this point has been that guest workers who want to attend Mass generally go to one of the Western embassies, especially Italy’s, or they gather either in a private home or on the grounds of a foreign-owned oil company.

Bishop Camillo Ballin, a 69-year-old Italian and member of the Comboni missionary religious order, leads this burgeoning Catholic community. He was in the United States in early March to raise money for the cathedral, which he estimates will cost around $30 million. He spoke to the Globe during his trip.

Ballin termed the decision in Bahrain “a good sign of dialogue which should be imitated by other countries.”

Though Ballin has to walk a tightrope in talking about the situation his flock faces, he didn’t hide that fact that he lives in one of the world’s most difficult places to be a Christian.

“It’s not the policy of the governments of these countries to convert anyone or to impose Islam,” he said. “But those pressures are often applied by individuals and radical Islamic movements.”

Ballin said that sometimes Christian workers are promised better salaries or other perks if they convert, and they’re often forced to work schedules that make attending Mass on Sunday virtually impossible.

Given those realities, he acknowledged that erecting a church is a tricky proposition. In deference to Islamic sensitivities, he said, the new cathedral won’t have a cross at the top or any other outward sign of its Christian identity.

“In the Arabic world in general, this is a time of cruel fanaticism,” Ballin said. “We don’t want to provoke the fanatics by making ourselves a target.”

In any event, Ballin said, outward appearances are secondary.

“As Christians, external crosses are important, but they’re not essential,” he said. “The important thing is to witness with our lives that as Christians, we’re children of a Father who loves everyone.”

Ballin also concedes that while some Gulf states may be accommodating, Saudi Arabia remains a no-go in terms of putting up a church to serve its large Catholic minority.

“Muslims preach that the entire country is a big mosque, and they say you can’t build a church inside a mosque,” he said.

Ballin wouldn’t be drawn into discussing the merits of that claim, saying only that “the day we can build a church in Saudi Arabia will be a glorious day not just for the Saudis but for the whole world.”

Anyone concerned with avoiding a clash of civilizations ought to pray that this growing Christian presence constitutes a bridge with Islam and doesn’t become yet another flashpoint.