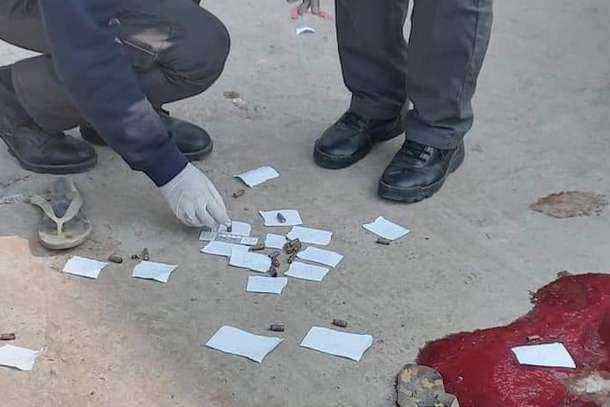 Police collect 27 bullet shells after the fatal shooting of Usman Masih and his mother. (Photo supplied)

Dozens of mourners attended the Nov. 10 funeral of a Catholic mother and son who were gunned down by their Muslim neighbor over an overflowing drain.

Usman Masih, 25, was shot dead along with his mother on Nov. 9 outside his home in Hasan Kathore, a village in Punjab province. His father, a laborer, has filed a police case against neighbors Atrat Bibi and her son Hasan Shakoor.

“She attacked my wife with a stick and called her son, who fired straight shots from his pistol. When my son tried to save his critically injured mother, he shot him as well. Both died on the spot,” he stated in the first information report.

“Two months ago, Atrat Bibi quarreled with my wife over the cleaning of a drain. The compound dwellers intervened for their friendship, but she kept the grudge.”

Hasan Kathore is home to 250 families, all of them Muslims.

Police have arrested Atrat Bibi but her son is still at large. Usman Masih was the only son of his parents. His daughter was born last week.

Nisar Bhatti, a district member of the Catholic bishops' National Commission for Justice and Peace in Gujranwala, offered legal aid to the family during a visit on Nov. 10.

“We strictly condemn the killings. They were the only Christian family in the village. Police collected 27 bullets shells from the spot. Usman Masih died half an hour after the shooting. Two vehicles stood nearby but none of the neighbors rushed the injured to the hospital located less than 10 kilometers away.  The family called emergency service 1122 but they arrived late,” he told UCA News.

“I am still haunted by the cries of the widow of Usman. The stigma of sanitary workers and being untouchables hardens for poor Christians.”

In June, a Christian man was shot dead for buying a house in a Muslim neighborhood in Peshawar city of Khyber Pakhtunkhwa province. Despite a lack of civic facilities, low-income Christians prefer living in ghettos near their relatives.

Church authorities often voice their disapproval with Pakistan’s provincial governments over the publication of job advertisements considered to be discriminatory towards minorities.