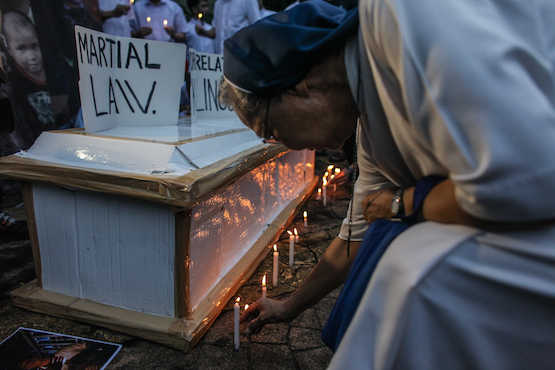 After months of relative silence, many religious from the Catholic Church have decided to take part in protest actions.

Auxiliary Bishop Broderick Pabillo of Manila, Retired Bishop Deogracias Iniguez of Caloocan and several rectors of theological schools were among 400 founding members of the Movement Against Tyranny coalition launched on Aug. 28.

Angelo Araja, spokesperson for Nicodemus Solidarity, said a quarter of the coalition founders come from Catholic parishes and congregations.

On Aug. 29, more than 100 seminarians, nuns, and priests from various religious congregations marched a mock coffin along a busy Manila street as they urged Filipinos to protest thousands of killings under President Rodrigo Duterte and martial law on the southern Philippine island of Mindanao.

The nuns and priests lit candles for more than 12,000 killed in Duterte's drug war. Commuters honked their horns in support as protesters held up photos of more than 30 children killed by police or vigilante groups.

Bishop Pablo Virgilia David of Caloocan and Redemptorist priests called the president’s campaign "a war against the poor."

The majority of the dead came from urban poor communities, targeted without due process, the clergy said. In contrast, they said, Duterte has bent over backwards for businessmen and government officials implicated in a smuggling case worth hundreds of millions of dollars.

Araja said more religious have signed up with the coalition to protest against rights abuses and environmental abuses against indigenous peoples and peasants.

"We have also heard stories of human rights violations in Mindanao and this also worries the church,” Araja added, saying the group’s members would meet with displaced residents of Marawi to help document the abuses.