The Church in Asia searches for new ways to make progress in the multi-religious continent as Catholic leaders ponder over the emerging realities and ways to revise their pastoral plans and priorities for the vast continent during the ongoing FABC general conference in Bangkok.

The Church in Asia has started a process of searching for new ways to work for peace, dialogue and evangelization in the multi-religious continent, where people suffer violence and poverty, according to Cardinal Charles Bo of Yangon, president of the Federation of Asian Bishops’ Conferences or FABC.

That was Cardinal Bo who spoke to media on Monday in Bangkok, mid-way through the two-week gathering of Asian bishops.

Besides celebrating the 50th anniversary of the FABC the church leaders and delegates are discussing ways to revise pastoral plans and priorities for the Church in Asia.

The general conference, the first such for FABC that began on Oct 12 has some 226 delegates, which included 20 cardinals, 120 bishops, 37 priests, and 49 lay people including eight nuns. Cardinal Charles Maung Bo of Myanmar talks during an interview at his office in Yangon on Jan. 6, 2015. (Photo: AFP)

People from all walks of life in Myanmar have mourned the death of at least 80 people in an aerial bombing of a musical concert in Christian-majority Kachin state. The killing of the people including leading Kachin musicians occurred when three military fighter jets bombed the concert site in A Nang Pa village last Sunday.

Hundreds of people gathered for the concert which was part of celebrations to mark the 62nd anniversary of the founding of the Kachin Independence Organization, the political wing of the armed rebel group, Kachin Independence Army. The tragedy in the northern state prompted many people to "black out” their profile photos on Facebook to express solidarity with the victims and ethnic Kachin people. People taking part in a candlelight protest during a demonstration against the military coup in Hpakant township in Myanmar's northern Kachin state. At least 80 people were killed at a concert in A Nang Pa, a village in Hpaknat township, when it was attacked by three fighter jets on Oct 23. (Photo: AFP/ Kachin Waves)

On Tuesday, a group of Christians held a prayer service in Majayang town to pay tributes to the victims. Buddhists groups lighted candles at their protest rally against the military rule. The deadly attack has also triggered international condemnation.

Since the military coup last year, Myanmar’s Christian-majority states – Kachin, Kayah, Karen and Chin – have experienced heavy fighting between ethnic rebel forces and the military. Scores have died and tens of thousands have been displaced as the military continued to attack both rebels and civilian targets.

People in the southern coastal region of Bangladesh are grappling to rebuild their lives after the powerful Cyclone Sitrang hit the country, killing at least 35 and leaving a trail of destruction. The cyclone, packing wind speeds of about 90 kilometers per hour made landfall in Bangladesh late on Monday and affected 13 districts along the coast of the Bay of Bengal.

Thousands of houses were destroyed or damaged and roads and villages were flooded due to heavy rain and tidal surges. The authorities evacuated millions to shelters before the cyclone hit the coastal belt. The deaths mostly occurred from the collapse of houses, and trees, and drowning. The storm uprooted many trees and electric poles, leaving vast areas without electricity and mobile connections for prolonged periods. Three regional offices of the Catholic charity Caritas in Khulna, Barishal, and Chittagong dispatched staff and volunteers as soon as the cyclone was forecast.

They helped people to move to safety and offered them dry food. The strong winds and flooding destroyed crops and washed away fish farms in vast areas in southern Bangladesh. The government and charity groups said they have been assessing the extent of damage to seek international funds to help victims rebuild their lives.

A court in Hong Kong convicted Catholic media mogul and pro-democracy supporter Jimmy Lai of two charges of fraud on Tuesday. Democracy and rights activists slammed Lai’s conviction as another blow to press freedom and democracy in the politically troubled former British colony.

The 74-year-old Lai is the founder of the now-defunct pro-democracy newspaper Apple Daily and chief of its parent company, Next Digital. He had earlier pleaded not guilty to the charges. He and two officials of Next Digital are accused of violating the lease agreement of the company. Jimmy Lai is a close associate of Hong Kong’s outspoken Cardinal Joseph Zen. He was arrested by the pro-Beijing regime after it launched a crackdown to break up a strong pro-democracy movement in 2019. He remained in jail since December 2020 and faces a series of charges including sedition, incitement, fraud, and collusion with foreign forces under the draconian national security law of 2020.

Police raids, arrests of journalists and staffs, and freezing of bank accounts forced the closure of Apple Daily last year. On April 16, 2021, a court sentenced Lai to 14 months in jail along with eight activists for joining an unauthorized rally in June 2020 to mark the 1989 Tiananmen massacre anniversary.

An Indian Catholic priest, who was accused of sexually abusing a minor boy in Pune city in the western state of Maharashtra, has surrendered before police last Sunday. Fifty five-year-old Father Vincent Pereira is accused of abusing the 15-year-old boy at his parents’ home in December last year.

The surrender came after nearly month-long efforts from the priest to evade arrest. He was booked in September under India’s stringent Protection of Children from Sexual Offences Act. A photo of Father Vincent Pereira as featured on his former school's website. (UCA News files)

Meanwhile, police said they have begun a probe against Bishop Thomas Dabré of Pune for allegedly attempting to cover up the crime.

Father Pereira was suspended from public ministries after police arrested him in September 2018 for abusing another teenage boy in a diocesan school. He was released in March 2020 after spending 18 months in jail.

Catholic leaders in Pakistan expressed joy as a global money-laundering watchdog removed the country from a watch list triggering hope for easing out of the financial crunch in the development and relief sector.

During an interfaith press conference on Monday, Archbishop Sebastian Shaw of Lahore said Pakistan’s exit from the grey list of the Financial Action Task Force will promote development and help the country overcome ongoing multiple crises. Archbishop Sebastian Shaw (center) along with others celebrate Pakistan's removal from a global money laundering watchlist at an interfaith press conference at the Bishop’s House in Lahore on Oct 24. (Photo courtesy of Catholic TV Pakistan)

Pakistan was put on the watch list in June 2018 after the country failed to implement policies aimed at stamping out money laundering and the financing of international terror groups. Next year, the government revoked the licenses of non-governmental agencies, including Church organizations, preventing them from receiving foreign funds.

The fund crunch badly impacted humanitarian efforts as more than 1,700 people were killed and 33 million displaced while a third of the country was submerged under water in the worst floods to hit Pakistan since mid-June.

A fatal fire ripped through a passenger boat in Indonesia's Christian-majority province of East Nusa Tenggara, leaving at least 14 people dead on Monday. The Cantika Express 77 caught fire in Naikliu waters, near the provincial capital Kupang. The tragedy adds to the long list of cases of maritime transport accidents in the country.

The province’s Search and Rescue Office said 326 people were evacuated, 14 of whom died. Most of the victims were found after floating in the sea for five to six hours. Officials said the boat was carrying far higher number of passengers than the manifest data of 167 passengers and 10 crew members. 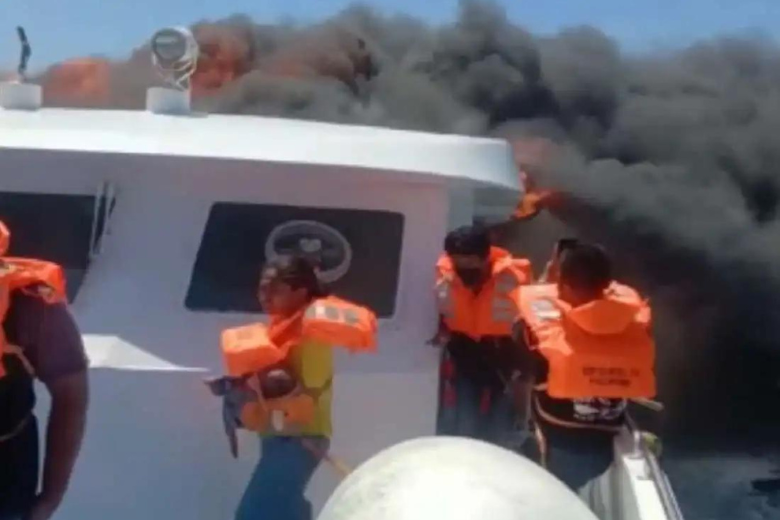 A survivor said before the fire started, he heard an explosion at the rear of the deck, which caused a number of passengers, including children, to jump into the sea. He said the boat had no alarm or warning sign when it caught fire.

Authorities in Vietnam have barred a Redemptorist priest from traveling to United States on Monday. The 45-year-old Father Joseph Truong Hoang Vu who works among old soldiers of South Vietnam is also known as a vocal advocate dealing with social injustice and religious freedom, besides fighting against illegal land grab.

Father Vu was stopped from boarding his flight to Manila in the Philippines from where he was scheduled to head to the US. Officials claimed he was prevented from leaving the country for social order and safety. Father Vu is in-charge of the Grateful program which provides support to 600 disabled Vietnam War veterans. He secures funding from benefactors in the US and other countries.

He is now one of the six Redemptorist priests in Vietnam barred from traveling abroad. Last month, Father Loc, an advocate for social justice and human rights, was prohibited from flying to the Philippines.

At least two Catholic dioceses in the Philippines have appealed for donations to undertake church repairs after a recent earthquake that hit several provinces in the country.

The Diocese of Bangued in Abra province and the Archdiocese of Tuguegarao in Cagayan province in northern Philippines have appealed for aid to repair cracked walls and fallen belfries damaged by the 6.4-magnitude earthquake on Tuesday. It was followed by numerous aftershocks early Wednesday that damaged government buildings, hospitals and churches. Earthquakes are common in the Philippines. In July, a 7 magnitude quake also in the mountainous Abra province triggered landslides and ground fissures, killing 11 people and injuring several hundreds of others.

The Philippines sits along the Pacific "Ring of Fire," an arc of intense seismic as well as volcanic activity that stretches from Japan through Southeast Asia and across the Pacific basin, making it prone to frequent quakes.