It inspired him on March 12, 2016, to establish an organization called Vox Point Indonesia, the only Catholic group producing Catholic politicians in the country.

“I was concerned about the low number of Catholics in legislatures at national, regional and local levels. It was because there were no ongoing, systematic activities addressing political issues among Catholics, which meant many lacked national insights,” Handoyo says.

“Catholics became apolitical after Ignatius Joseph Kasimo Hendrowahyono’s era. They thought politics was a dirty business. I wanted to change that way of thinking." 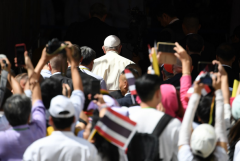