Although a ban on the popular transport mode was lifted, those drivers serving shuttered universities are still suffering 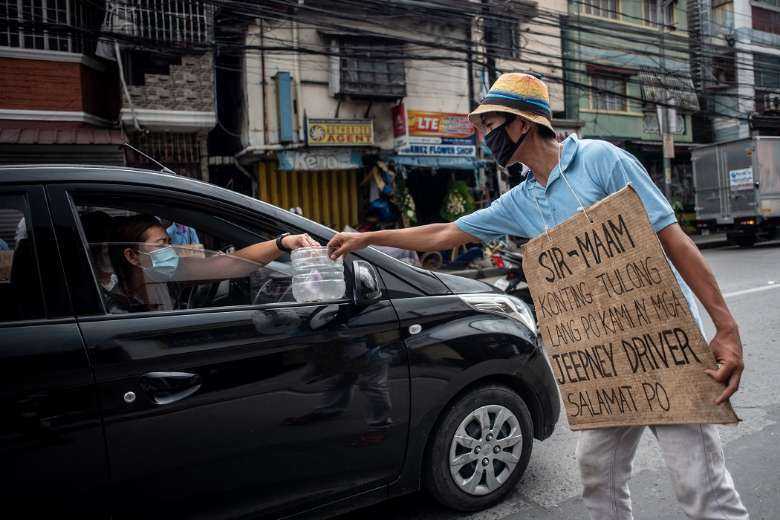 A jeepney driver wearing a face mask and a placard reading 'Sir/mam, asking for help, we are jeepney drivers' receives alms from a motorist on a road in Manila on Aug 6, 2020. (Photo: AFP)

A group of Catholic lawyers in the Philippines have helped spur efforts to help those hit hardest by the pandemic by giving out cash and grocery packs.

The recipients of their generosity were drivers of the iconic jeepney buses in Manila's Quezon City suburb who usually take passengers on a route from the Jesuit-run Ateneo de Manila University to the University of the Philippines, two of the biggest universities in the country.

“They still do not have passengers because universities are not yet allowed to conduct face-to-face classes,” said one of the lawyers who wished to remain anonymous.

Transport authorities suspended jeepneys and buses in March 2020 because of Covid fears and only lifted the ban on Nov. 4.

“Many of us are still living a hand-to-mouth existence. If we do not work for a day, we have nothing to feed our children. Now we are in debt because we have had no work for more than a year,” jeepney driver Rafael Castro told UCA News.

Life has been very difficult in the past months. Even now, we have no passengers. Who will ride our jeepneys?

He said some had resorted to scavenging to survive while others went back to the provinces to become farmers.

“Life has been very difficult in the past months. Even now, we have no passengers. Who will ride our jeepneys? Most of our passengers are university students, teachers and staff,” Castro said.

The lawyers' group told UCA News: “We do not only give them fish [food]. We taught them how to catch fish. Teaching them to fish is giving them an amount they can use to rebuild their lives.”

Transport authorities have started distributing fuel subsidies worth one billion pesos ($20 million) to more than 136,000 jeepney drivers. Each driver will receive a card worth 7,200 pesos which they can present at gasoline stations.

Meanwhile, Philippine artists have announced their return to the country’s premier cultural center after more than a year because of the pandemic.

The Philippine Philharmonic Orchestra, together with Ballet Philippines and Bayanihan Dance troupe, are to perform live at the Cultural Center of the Philippines starting Nov 26.

Father Jonard Santa Maria of Legaspi Diocese has appealed to people to help the artists by buying tickets to watch their performances.

“Our artists were badly hit by the pandemic. There were no concerts because mass gatherings were prohibited. Now that the economy is slowly opening up, let us help them to recover too, as the arts are an integral part of our nation,” he said.