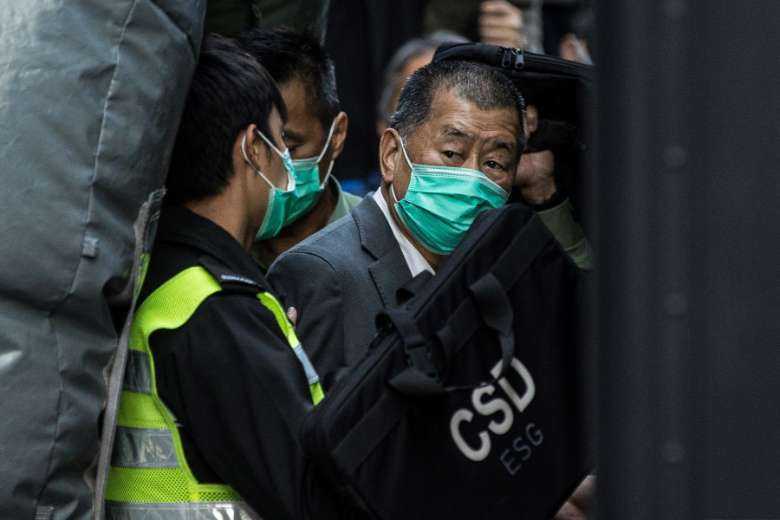 Hong Kong media tycoon Jimmy Lai is escorted into a Hong Kong Correctional Services van outside the Court of Final Appeal in February after being ordered to remain in jail while judges consider his fresh bail application. (Photo: AFP)

Jailed Hong Kong media mogul Jimmy Lai was among three democracy campaigners convicted today for taking part in a banned Tiananmen vigil as the prosecution of multiple activists came to a conclusion.

Authorities had charged more than two dozen pro-democracy politicians and activists over a vigil last year, which commemorated the victims of Beijing's deadly Tiananmen crackdown in 1989 despite a police ban.

The trio were the only ones to contest their charges in court, meaning they were the last to receive their verdict.

They argued they went to light candles in a personal capacity and had not "incited" others to join an outlawed rally.

At one point, Chow, a trained barrister who represented herself in court, likened her actions to "tank man" — the figure who famously stood in front of a Chinese tank during the Tiananmen crackdown and became an icon.

But District Court judge Amanda Woodcock dismissed those arguments as "frankly nonsensical" and convicted them of charges including inciting and taking part in an unauthorised assembly.

"The reality was that any intention to come out and participate in the candlelight vigil in Victoria Park that night was an act of defiance and protest against the police," Woodcock ruled.

Amnesty International described the verdicts as the latest "attack on the rights to freedom of expression and assembly" in Hong Kong and said authorities had criminalised a "peaceful, socially distanced vigil".

The convictions come as authorities crack down on dissent in Hong Kong and remould the once outspoken finance hub in the mainland's authoritarian image after huge and often violent democracy protests two years ago.

In practical terms, the latest verdicts make minimal difference to the convicted.

Lai, Chow and Ho are among dozens of activists already behind bars facing separate prosecutions under a strict national security law that Beijing imposed on Hong Kong last year.

But their prosecution illustrates how much the gap has narrowed between Hong Kong and the mainland, where authorities have long sought to scrub memories and official records of Tiananmen.

For three decades, Hong Kong's annual June 4 candlelight vigil would attract tens of thousands of people, which — with its slogans for democracy and ending one-party rule in China — became a symbol for the political freedoms enjoyed in the city.

But Hong Kong authorities have banned the last two vigils citing both the coronavirus pandemic and security fears.

This year Beijing made it clear it will no longer tolerate Tiananmen commemorations in Hong Kong or Macau, the only two places within China where public remembrance could take place.

Multiple organisers of the annual vigil, including Chow, were charged with the national security crime of subversion while a June 4 museum they ran was closed by authorities and its exhibits carted away.

Unlawful assembly prosecutions have been brought against activists who took part in both the 2020 and 2021 banned Tiananmen vigils.

Previously, 16 politicians and activists, including prominent campaigner Joshua Wong, were sentenced to six to 10 months in jail over their roles in the vigil, with a few granted suspended sentences.

Lai, Chow and Ho and the remaining activists who pleaded guilty — most of whom are also in custody — will be sentenced on Dec. 13.