More than 93 Catholic investors from around the world are calling on the Brazilian government to better protect the Amazon and the rights of its indigenous population.

The group sent a letter to Brazilian officials, including President Jair Bolsonaro and Vice President Hamilton Mourão, listing about a dozen concrete demands for the protection of the rainforest and its indigenous peoples.

"Today we approach you not only as Catholic institutions, but also as investors and potential investors in Brazilian government bonds as well as in shares and bonds of Brazilian companies," said the letter, sent in late March.

Among the Catholic groups' demands is the implementation of a consistent plan to combat deforestation, including a specific budget and measurable intermediate goals.

Citing data that shows that more than 400 square miles of rainforest were cut down between August 2019 and July 2020, the letter said the investors, "as Catholics and citizen of this world," are extremely concerned about the continuing destruction of the Amazon rainforest.

"This devastating environmental damage is in stark contrast to the Catholic guiding theme of preserving creation and the call of his holiness Pope Francis to protect the climate and the environment in the encyclical Laudato Si'," the letter said.

The Catholic institutions said they wanted to enter into a dialogue with the Brazilian government.

"We would like to motivate the Brazilian government to finally respect human and environmental rights and take appropriate countermeasures to remedy the current situation," the letter said.

Among the demands made by the entities is the implementation of a consistent plan to combat deforestation, including a specific budget and measurable intermediate goals. The group warned that if no actions were taken, they would divest from Brazilian companies and government bonds.

Among those who signed the letter were representatives of the German Catholic bank BKC, the Special Commission on Integral Ecology and Mining for the Brazilian bishops' conference, the Global Catholic Climate Movement, the Churches and Mining Network and representatives of multiple religious orders and organizations. 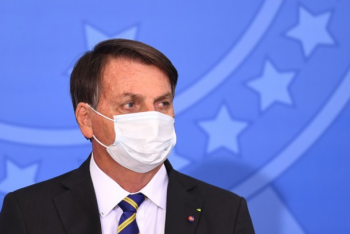 "The initiative seeks to pressure the (Bolsonaro) government to change their policies in regard to the Amazon region and the people living there," Franciscan Brother Rodrigo de Castro Amédée Péret, a member of the Churches and Mining Network, told Catholic News Service.

"There has been a dismantling of the protection system of the Amazon region. This government adopted a predatory model, allowing the advancement of illegal miners and illegal clearings all over the territory," he said.

Brother Péret said the response from Brazilian government representatives "was immediate, signaling that at least officials are listening." An official government response said the demands were forwarded to the ministries of Justice and the Environment.