Indonesian police have arrested a Catholic rights activist for criticizing the Indonesian military in a speech about victims of past human rights abuses during a rally last month in Jakarta.

The protest was against a move to place active military officers into government ministries and agencies.

"He is accused of criminal acts by spreading information that has caused hatred and hostility," Prasetyo said.

Robet — who is a lawyer and lecturer at the Jakarta State University — is charged for violating the 2008 Electronic Transaction Information law. 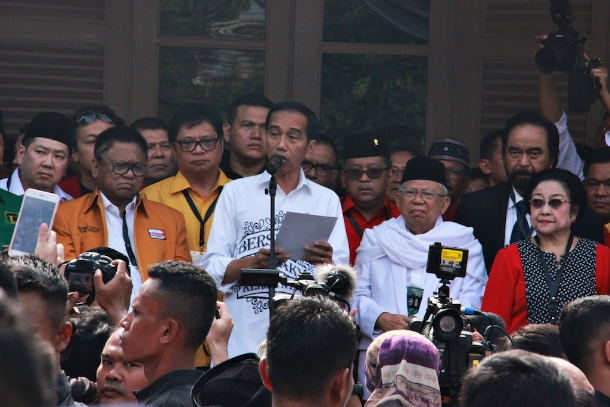 Someone guilty of breaking that law could receive 18 months in jail, Prasetyo  said.

In a video posted on YouTube, Robet sings a song at the Feb. 28 rally which is considered as insulting to the military.

"ABRI is useless, just dismiss it, replace it with the student regiment, if necessary replace it by scouts. [They] pay nothing when riding on a city bus or eating at a street-food stall,” some of the lyrics say.

Robet was released from police custody on the afternoon of March 7, but his case remains under police investigation.

He maintains he is innocent of the charges.

"The song was a criticism of the armed forces in the past, not against the army in the present," Robet told news portal Tempo.co.

"In many ways, I actually praise and appreciate reform within the military," he said.

His arrest has been roundly criticized by rights groups who say he did not insult the military.

In a joint statement, activist groups such as Amnesty International Indonesia, the Commission for the Disappeared and Victims of Violence (Kontras), and Imparsial, condemned the police action.

“The arrest of Robertus Robet is a threat to civil freedom and injures democracy,” the statement said.

Suciwati Munir, widow of Munir Said Thalib, a rights activist murdered in 2004, and who founded the Kontras human rights organisation, also said Robet did not criticize the military.

“I am surprised that there is still this kind of arrest of activists during this reform era that upholds justice and democracy,” she told ucanews.com.