Migration is increasing because of drought, climate change, political instability, poverty and the pandemic's economic fallout 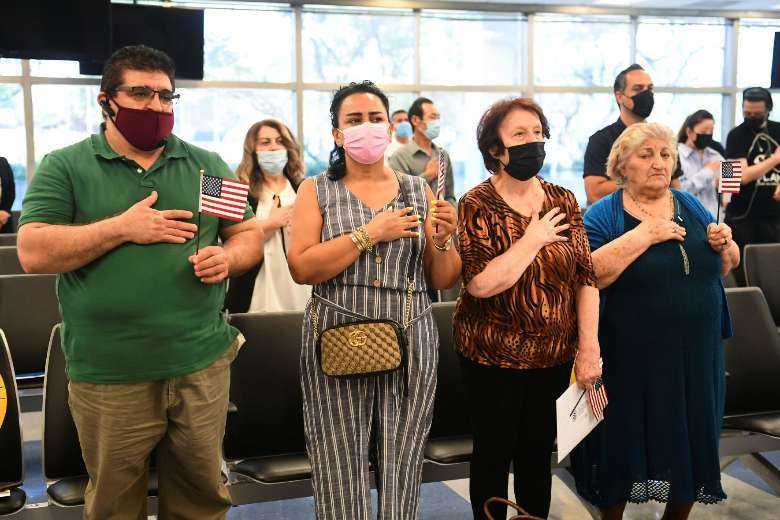 New US citizens place their right hands over their hearts as they take the Oath of Allegiance of the United States during a naturalization ceremony ahead of World Refugee Day by the US Citizenship and Immigration Services on June 17 in Los Angeles. (Photo: AFP)

A group of at least 162 organizations are asking bishops' conferences in the U.S., Central America and Mexico to "hear the cries of our brothers and sisters on the move and respond with bold leadership."

In the June 17 letter, signed by groups from Latin America and the U.S. that work with migrants, they asked for a unified response by the Catholic Church in the region, as many get ready this summer to make a push for immigration reform before the U.S. Congress.

"This summer and fall, we have the best opportunity in a generation to make progress on core Catholic migration priorities. We need your pastoral and moral leadership to meet this moment," said the letter.

"The promise by a new U.S. administration to address the root causes of migration, treat migrants humanely and put immigrants who've lived in the U.S. for years, and in many cases decades, on a path to citizenship," it continued, "is a unique opportunity to relieve pain and suffering too long endured. This moment requires a whole church response that is regional, united and robust."

The letter published by the Hope Border Institute in El Paso, Texas, came days after an emergency meeting of bishops from the U.S., Mexico and Central America gathered at Mundelein Seminary in Illinois June 1 and 2 -- along with representatives of prominent Catholic organizations -- seeking collaboration from the church in the region.

The organization helped arrange the meeting attended by a contingent from the U.S. Conference of Catholic Bishops, including the USCCB's president, Archbishop José H. Gomez of Los Angeles.

Many families in our parishes have lived in the US for a generation without legal status, exposed to exploitation and insecurity

"We are Catholic organizations from the U.S., Mexico, and Central America, working to protect migrants and improve life in the communities they are fleeing," the letter said. "This summer and fall, we have the best opportunity in a generation to make progress on core Catholic migration priorities. We need your pastoral and moral leadership to meet this moment."

The letter asked for a humane response due to increased migration because of drought, climate change, political instability, poverty and the pandemic's economic consequences, which may drive an increase of people from Central America to the U.S.

"These realities require a pastoral response to provide more safe refuge for people while they travel across the region and wait for resolution of their cases, and more support to resettle and integrate children and families on arrival in their new communities or when they return home," the letter said.

"As a church accompanying migrants every step of the way, we are uniquely situated to fill the breach by planning for the increase in migrants," it added. "As we do so we can help public authorities develop a coherent, regional migration system, focused on protecting people, respecting the right to asylum, and offering safe and legal pathways for people to reunite with family, seek refuge, and work (increased temporary visas for agricultural and other essential work)."

The letter, referring to some of the political action ahead in the U.S. Congress, said it is important to seek a pathway to citizenship for those who may not be in the country with permission.

"Many families in our parishes have lived in the U.S. for a generation without legal status, exposed to exploitation and insecurity," the letter said. "We must use all the tools available to make tangible progress on the long-standing goal of providing a path to citizenship for all 11 million undocumented immigrants.

"Your leadership is critical to countering the demonization of immigrants, reducing polarization on this issue and making the moral and practical case for putting our parishioners, friends and neighbors on a pathway to full social inclusion."

The letter also spoke of addressing causes that force people to migrate, as the U.S. prepares to spend $4 billion over the next five years to address the root causes of migration from Central America.

"Local Catholic organizations and partners (in the region) are working to ensure that these resources reach the people and communities that need them the most, following local priorities and plans," the letter said.

Your leadership is pivotal in reorienting US policy toward Central America

It urged there be "coordinated leadership from the church in the United States, Mexico, Honduras, El Salvador and Guatemala" to provide "a much-needed boost to these efforts."

This "would help us channel resources into the local communities that people are fleeing to create economic opportunities, reduce violence and help small farmers adapt to climate change," the letter said.

"Your leadership is pivotal in reorienting U.S. policy toward Central America, away from low-wage employment and extractive industries, toward better jobs, sustainable development and human rights protection," it explained.

The organizations said they are ready to work to "lift up the pastoral solidarity and moral witness of the Catholic Church" that is needed at the moment.

"As St. Oscar Romero reminded us, there are not two categories of people, some born to have everything and others who can't enjoy the happiness that God has created for all," the letter said.

"It is Jesus Christ present in the movement of people across borders, especially those who flee in search of protection and a more dignified life," the letter concluded. "With eyes of faith, let us not ignore this divine invitation to greater solidarity and to grow in just and right relationship with one another."