An Indonesian worker checks a production well of a geothermal power plant in Kamojang, West Java, in this file photo. Farmers on Flores are opposed to power plants being established there, saying they will likely be pushed off their land. (Photo by Adek Berry/AFP)

Around 1,000 Catholic farmers on Flores Island in Indonesia’s East Nusa Tenggara province have called on the government to halt a geothermal power plant project, saying it will damage the environment and likely drive them away from their homes.

They have also enlisted the help of the local Church in their fight.

Farmers’ representatives from Wae Sano in West Manggarai district made their demand to district head Agustinus Dula during a meeting on Feb. 18 and called for an immediate stop to drilling being carried out in various locations.

Some of the drill sites are just a few meters from their homes and a natural spring, which is their main water source, they said.

He said if it is not stopped, their villages and land, which they have farmed for decades, would in all likelihood disappear.

The project was initiated by the central government and is managed by a state-owned firm — PT Sarana Multi Infrastruktur. It is part of a government plan to use 16 potential geothermal sites on Catholic-majority Flores Island to meet its electricity needs. The project is being co-funded by the government and the World Bank.

The government says it is looking to tap into the immense power of its volcanoes and become a global leader in geothermal energy and slash its greenhouse gas emissions.

However, according to Herman Hemat, a local resident, villagers have been kept in the dark about any potential dangers the project could bring. 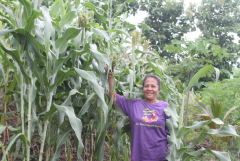 Planting sorghum proves to be a blessing on Flores Island

District chief Dula said after the Feb. 18 meeting that he would ask the company to temporarily stop its activities and listen to people who stand to be affected by the project.

Since drill sites were established in 2017, the farmers have made various attempts to stop the project, including holding protests outside the local assembly, the district chief’s office, and also sought assistance from the Church.

Valens Dulmin, advocacy coordinator of the Franciscans’ Commission for Justice, Peace and Integrity of Creation, said it is looking into the issue after receiving an appeal for help from the farmers. "We will stand by them," he said.

Melky Nahar, campaign manager of the Mining Advocacy Network, said this was a clear example of the government ignoring the rights of local people.

"If the government is serious about working for the welfare of the people, it should not allow any activities that destroy their living space," he said.