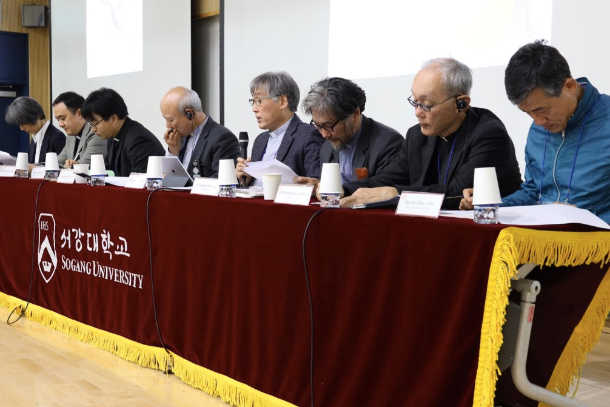 Catholic experts from Japan and Korea discuss ways to build peace between their hostile nations at an Oct. 30-31 international symposium at Sogang University in Seoul. (Photo: Catholic Times, Korea)

Ahead of Pope Francis’ visit to Japan this month focusing on global peace, Catholic scholars from Japan and South Korea are seeking ways to end the conflict between the two nations.

Some 50 scholars from the rival neighbors met for an international symposium on Oct. 30-31 in Seoul after diplomatic relations plummeted to a new low in recent months. “The road to reconciliation should be a continuation of asking for forgiveness and forgiving,” said Korean Jesuit Father Alexander Pak Sang-hun, director of the Jesuit Research Center for Advocacy and Solidarity.

The Jesuit priest was referring to the center of the dispute between the nations — compensation for some 200,000 Korean “comfort women” the Japanese forced into sexual services during the Second World War. Japan claims the compensation issue was settled as Japan gave more than US$800 million in economic aid and loans to Korea in 1965 when diplomatic relations were also normalized. Japan also apologized for its crime of using women as sex slaves and in 2015 promised to set up a US$9 million fund to help the surviving victims, all of them considered to above the age of 80 now. Lim Ji-hyeon, director of the Critical Global Studies Institute in Korea, introduced a letter sent by the Polish bishops’ conference to its German counterpart in 1965. The message expressed forgiveness for Nazi atrocities in Poland. “The letter was unacceptable at the time, but it acted as momentum for peace between the countries. The exchange meetings of Japanese and Korean bishops for the past 20 years will be the foundation of peaceful solidarity between the two rival countries,” Lim said. The works of the “churches of Japan and Korea go beyond church circles to bring peace through solidarity,” said Jesuit Father Mitsunobu Ichiro, a professor at Sophia University in Tokyo. The bishops of Japan and Korea have been holding annual exchange meetings since 1996. “Caritas (love) and Reconciliation of the Catholic Church in Japan and Korea” was the theme of the symposium organized by the Critical Global Studies Institute and the Theological Study Institute of Jesuit-run Sogang University. The Catholic scholars met as South Korean President Moon Jae-in and Japanese Prime Minister Shinzo Abe prepared for the meeting of the Association of South East Asian Nations (ASEAN) in Bangkok.  The leaders had a brief meeting on Nov. 4, the first in over a year after the long-running dispute between the nations spilled over to economic and business ties. The diplomatic tension between them continues as Pope Francis prepares to visit Japan and its nuclear-bombed cities of Hiroshima and Nagasaki on Nov. 23-26, when he is expected to speak against nuclear weapons and call for global peace. Pope Francis, while meeting with Japanese bishops, is expected to discuss their efforts to bring peace in the region, where communism, nuclear threats and historic rivalries force the nations to perceive each other as enemies.