When calls came through for young volunteers to help quarantined people in Covid hotspot Sittwe, Benedict Saw Thaw Moe didn’t hesitate and quickly decided to offer his time and energy on the front line.

Despite his parents’ concern over the spread of the deadly coronavirus and the stigma faced by healthcare workers and volunteers, Saw Thaw packed his bags and left for Yangon.

Encouraged by his father, the ethnic Karen from Insein township in Yangon went to Sittwe, capital of Rakhine, to join other volunteers at quarantine centers on Aug. 26.

Locally transmitted cases have emerged in Sittwe since Aug. 16 and the contagion spread to several townships in the conflict-torn state within two weeks.

While Saw Thaw served as a volunteer in Sittwe, he had the privilege of taking part in a video conference with State Counselor Aung San Suu Kyi to discuss the Covid-19 situation and how the government needs to respond.

During a video conference including the chief minister and health officials from Rakhine, he talked about why he decided to work as a volunteer in Sittwe, far from his hometown.

“God teaches us to love our neighbors and help those in need and the teachings of Jesus Christ urge us to give a hand to every human being. A true Christian is one who helps those in need regardless of race and religion,” he said.

Asked how his father responded when he sought permission, he said his father said there are many priests who died on the front line while caring for the infected.

“I would be proud of your work and commitment even if you face a critical condition,” his father said.

The Catholic youth told Aung San Suu Kyi of the challenges on the ground as protective equipment is not arriving in time and the need for quality products and more volunteers to help the growing number of people who are in quarantine centers. 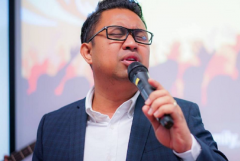 “We have no fear of being infected with the virus but we, the volunteers, need protection so that we can help the people effectively,” Saw Thaw said.

Saw Thaw is vice-president of the Yangon Archdiocesan Catholic Youth Commission and has already served in four quarantine centers in Yangon including St. Joseph's Catholic Major Seminary, which has been turned into a quarantine facility.

The National Catholic Youth Commission (NCYC) has hailed Saw Thaw as “a good example for young people” in the country as he has been serving in a frontline role as a volunteer since the pandemic erupted in March.

“On behalf of Catholic youths in Myanmar, we are really proud of his dedication and commitment, setting a good example to others,” the NCYC said.

Hundreds of youths from various denominations have signed up for the program as part of the Church’s response as Myanmar has battled the pandemic since May.

Church officials have urged young people to work as volunteers in the Covid-19 campaign and quarantine centers.

Myanmar had reported 887 cases of Covid-19, nearly half from Rakhine state, with six deaths and 354 recoveries as of Sept. 2, according to health officials.

As cases surge in the country, the government has extended preventive measures and banned international flights until Sept. 30 to control the spread of the virus.

State and private high schools which reopened in July were closed from Aug. 27. Middle and primary schools have also had reopening dates delayed for an unspecified period.

Rakhine state has been under lockdown and a nighttime curfew since last weekend. Near Sittwe, more than 100,000 Rohingya remain in camps for displaced persons where they have had restricted freedom of movement and limited access to healthcare, education and employment opportunities since 2012.

Rakhine is one of the poorest states in the Southeast Asian country with limited medical workers and inadequate healthcare facilities.

The United Nations said the Covid-19 situation in Myanmar is particularly worrying as it has a weak healthcare system and humanitarian problems.

Myanmar is considered among the most vulnerable countries along with Cambodia, Indonesia, Laos, the Philippines and Timor-Leste among the 11 nations of Southeast Asia, according to a UN report in July.

Myanmar has 8.6 physicians and 10 nurses and midwives per 10,000 people, falling short of the World Health Organization’s minimum. Health expenditure in the country was just 5 percent of GDP in 2016, according to the UN.

Critics say the country has a relatively limited laboratory capacity and a dearth of skilled health workers. Myanmar’s public health system has all but collapsed due to mismanagement by the military over the last six decades.