The Dec. 27- 29 meeting will discuss and pass the work report of the two government-sanctioned church bodies 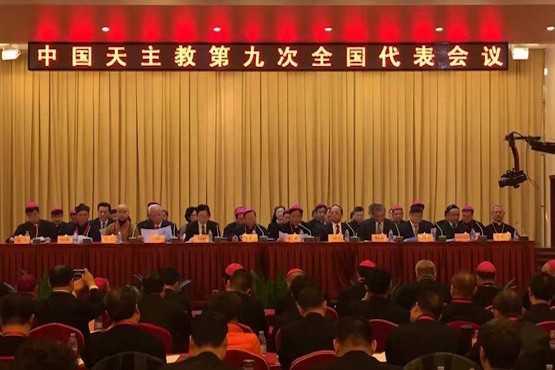 Church leaders of the Chinese Catholic Patriotic Association and the bishops’ conference sitting on stage at the Ninth National Congress of Catholic Representatives that convened in Beijing on Dec. 27, 2016. Religious Affairs officials and leaders of other religions were also invited to the opening session. (Photo supplied)

The Ninth National Congress of Catholic Representatives has convened in Beijing to select new leaders for the Chinese Catholic Patriotic Association (CCPA) and the Bishops’ Conference of the Catholic Church in China (BCCCC) of the open church community.

The Dec. 27- 29 meeting will also discuss and pass the work report of the CCPA and BCCCC and approve amendments to the constitutions of the two government-sanctioned church bodies.

A state leader is expected to greet representatives after the congress closes.

Coming from 31 provinces and autonomous regions, the 365 representatives include 59 bishops, 164 priests, 30 nuns with the rest being provincial lay leaders. All the bishops are government recognized and majority of them are approved by the Vatican.

Bishop Fang Xingyao of Linyi, chairperson of the CCPA, delivered the opening address before Bishop Ma Yinglin of Kunming, president of the bishops’ conference, submitted the work report.

The CCPA and BCCCC has united Chinese Catholics under the banner of love for country and church to promote a "Sinicized" theology, insist on an "independent principle," work on running the church in a democratic way and actively participate in social charities, Bishop Ma said in his report.

In the next five years, they will "implement comprehensively the spirit of the National Conference on Religious Work," he added.

The "independent principle" refers to a church independent of the Holy See while a "Sinicized" theology denotes making foreign Western religions more Chinese.

In the Catholic congress on Dec. 27, Wang Zuo’an, director of the State Administration for Religious Affairs, lauded the CCPA and BCCCC for achieving "remarkable results" since the previous congress.

Since 2010, "the China Catholic Church has adhered to the path of an independent and self-governing church, formulated theology and cultivated church personnel who love the country and church," he said.

The congress, usually held every five years, was delayed for a year to accommodate negotiations between China and the Vatican.

The congress is controversial as it is the key policy-making body that overrides the CCPA and BCCCC, both of which are not yet recognized by the Vatican. The CCPA is particularly accused of controlling the church on behalf of the government.

Many Chinese Catholics have rejected the congress, considering it to be incompatible to Catholic doctrine due to its advocacy of an independent church and for its leaders serving as "rubber stamps" to pass all government-controlled motions.

The Holy See had asked its bishops not to participate in the congress in 2010 and expressed its sorrow over reports that some bishops were forced to attend.

However, it has changed its tone this time under Pope Francis who is eager to improve relations with China, as hinted in a "lukewarm" statement on Dec. 20 by Greg Burke, spokesperson of the Holy See.

"The Holy See will make a judgment based on proven facts. In the meantime, the Holy See is certain that all Catholics in China anxiously await positive signals, which will help them to place their trust in the dialogue between the civil authorities and the Holy See and to hope for a future of unity and harmony," he said.

Observers believe Burke’s statement as a go-ahead signal for Chinese bishops to attend the congress. "If the statement is too strong, Beijing may close the door for dialogue," said a Chinese researcher who asked not to be named.

In Hong Kong, the diocesan Justice and Peace Commission led a group of laypeople against the congress in front of the central government’s liaison office on Dec. 26.

"The Catholic Church has always opposed the congress that violates the Catholic doctrine," commission officer Or Yan-yan told ucanews.com.

"While conducting negotiations with the Holy See, the Chinese authorities know the congress violates the Catholic faith but it still continues to hold it. As Catholics, we have a duty to voice our conscience clearly, particularly when our fellow brothers and sisters in China cannot do so," she said.