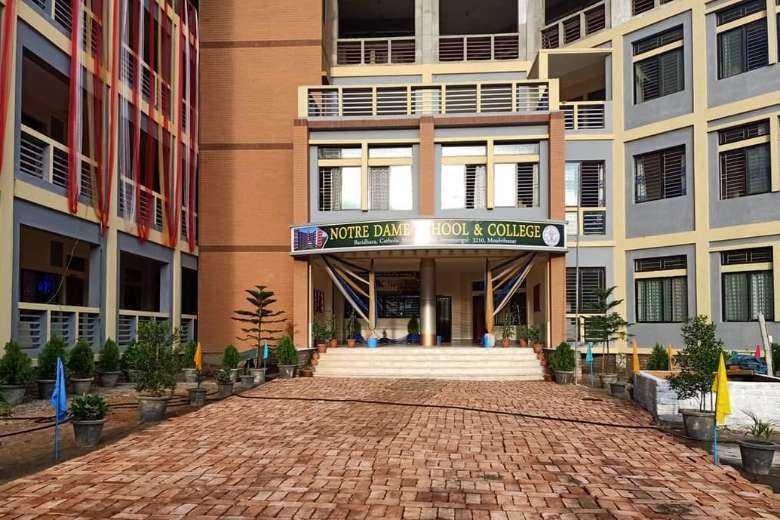 The first Catholic college has opened in a predominantly indigenous diocese of Bangladesh with an aim to provide inclusive and affordable education to poor and underprivileged communities.

Notre Dame School and College was inaugurated at Srimangal of Moulvibazar district in northeast of Bangladesh on July 22. The area is covered by Sylhet Diocese that has 20,000 mostly indigenous Catholics.

The college is named after Holy Cross-run Notre Dame College in capital Dhaka, considered one of the finest education institutes in the country for its quality education and academic excellence and discipline.

The institute in Srimangal has been running a school section since 2008, catering to 600 students from grades one to 10 annually. It has been upgraded to college level to educate students for grades 11-12.

Principal Father Rozario said the institute is aiming to serve 4,000 students annually when the six-story building is fully complete this year. Boarding hostels to accommodate 250 students are also under construction.

We would like to educate all, especially students from underprivileged communities like indigenous people and children of tea workers

The college will admit poor and indigenous students at half the cost and offer them accommodation, he said.

“We would like to educate all, especially students from underprivileged communities like indigenous people and children of tea workers, and seek to promote justice and peace through education. We also want to offer values-based formation,” Father Rozario told UCA News.

The priest said Holy Cross priests have been serving poor and indigenous communities through St. Joseph’s Church for more than 70 years.

“We have seen local indigenous people lag behind in education. They have been coming to us for education and we have sent them to other parishes and cities where they can get education. We realized that if we could have set up a school and college, they could benefit greatly,” Father Rozario said, adding that they aim to address challenges of local people in terms of student admission, long traveling distances, poor education quality, language barriers and high admission and tuition fees.

Local Catholics and Muslims expressed enthusiasm for the new college.

Monica Khongla, 40, headwoman of Meghatila Punji (clustered village), said she was forced to send her two daughters to study in schools in Gazipur district in central Bangladesh, about 175 kilometers away.

“Since there was no missionary college, those who had money used to go to the city to study, but most poor students dropped out due to lack of money. But since it is a missionary college and poor Christian students can study here with special facilities. I hope it will help overcome the lack of educated people among indigenous communities,” Khongla, an ethnic Khasi Catholic and mother of two, told UCA News.

Zakirul Hasan, a government education officer in Srimangal, thanked the Church for opening a good college in the area.

“We are very happy with the educational activities they are doing here and we will continue to support them in spreading education in this area,” Hasan told UCA News.

Mohammad Rafiqul Islam, 36, a development worker, said he wants to send his son and daughter to the institute.

"I know from my friends that the standard of education of the missionary institution is very good. I did not have the opportunity but now I am happy that I can send my son and daughter to a missionary school and college,” Islam told UCA News.

The Holy Cross Congregation, with three branches of priests, nuns and brothers, is the largest religious order in Bangladesh, where it has operated since 1853. The order is well known nationally for its education apostolate that includes the country’s only Catholic university, several colleges and schools.

In particular, Holy Cross fathers run Notre Dame University Bangladesh, a school and college and two colleges for about 7,500 students.

Education is a major ministry for the Catholic Church in Muslim-majority Bangladesh, where Christians account for less than half percent of more than 160 million people.