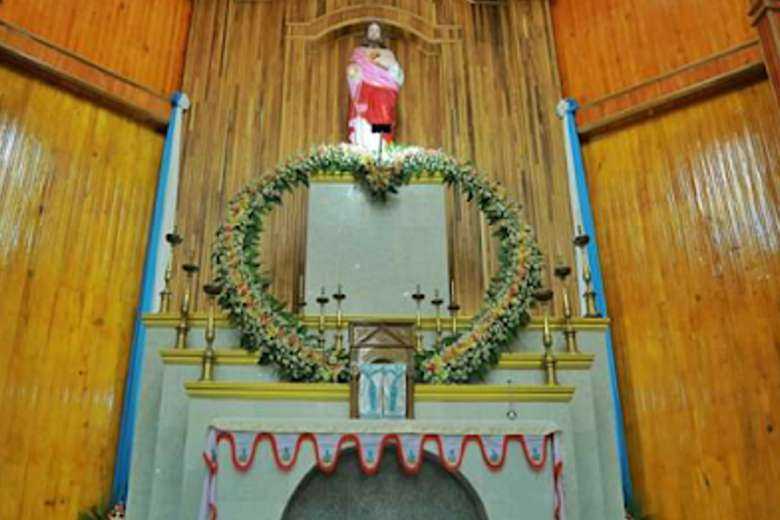 Sacred Heart of Jesus Cathedral in Pekhon has been struck by shelling for a second time. (Photo: Wikipedia)

Religious buildings including Catholic churches and convents continue to be the primary target of Myanmar's military, which is reinforcing its troops to crush local militias.

Sacred Heart of Jesus Cathedral in Pekhon town, which belongs to the Diocese of Pekhon in Shan state, was hit by military artillery on Nov. 9.

There were no reported casualties despite the windows and pews being damaged, according to church sources.

The cathedral was also struck by artillery fire in June.

The attack came three days after a convent in the same township was hit by military shelling on Nov. 6.

No casualties were reported at the convent of the Sisters of Zetaman, which is situated in Jeroblous Marian shrine in Pekhon township.

It was intense fighting, so the majority of people have fled from their homes to safe areas

Fighting between the military and the combined forces of the Karenni army and Karenni People’s Defense Force has intensified since Nov. 2.

More than 10,000 people from Pekhon township have been newly displaced due to the fighting and indiscriminate attacks with heavy weaponry by the military, according to aid workers.

A Catholic social worker said his family were forced to flee from their homes in Pekhon town as artillery shelling fell on his neighbors.

“It was intense fighting, so the majority of people have fled from their homes to safe areas,” he told UCA News.

He said the fighting has impacted their response to displaced people as church social workers have also fled their homes and taken refuge in safe areas.

Pekhon Diocese is one of the worst-affected areas along with Loikaw Diocese in Kayah state due to the escalating conflict since May.

More than 100,000 civilians have been forced to seek refuge in churches, convents and makeshift camps even while the military is targeting priests and pastors, bombing and vandalizing churches in the predominantly Christian region of Kayah and Chin states.

At least five Catholic churches in Loikaw Diocese have been attacked by the military and a May 23 attack killed four Catholics and wounded eight others.

Church leaders including Pope Francis have called for the military not to target religious buildings as places of worship are the cultural property of a community covered by international protocol.