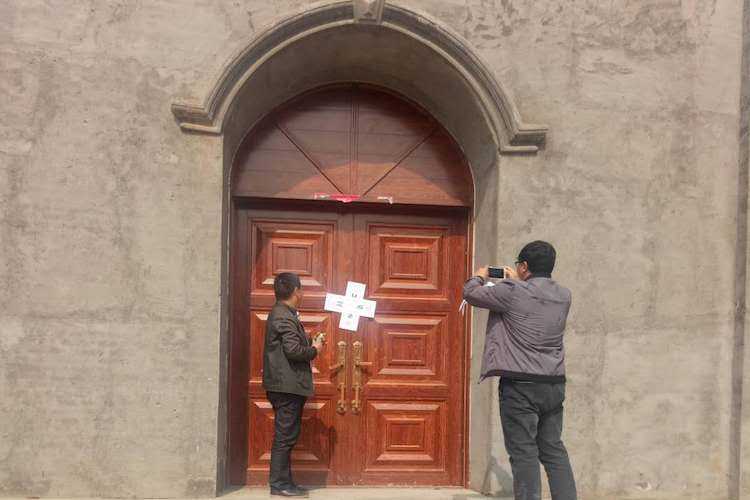 Beijing has extended its crackdown on religion in Henan province — a key center of Christianity in China — by seizing an unregistered Catholic church managed by an official priest.

The parish priest in charge of the seized church was registered with the government but the church was not, a source told ucanews.com.

"The government will not allow the church to register or to open," he said.

On April 24, cadres from Diandian Town in Shangcai County sent two officials in the morning to seal the main entrances of Gadazhang Catholic Church in Zhumadian Diocese.

A video circulated online showed an elderly Catholic tearing a seal from the church's gate and a group of Catholics arguing with an official suspected to have posted the seal.

The official told them the closure was the policy of the Communist Party.

The source said authorities would probably not confiscate the church but clergy would not be able to return for some time.

The parish priest has asked Catholics to "pray for the church under suppression."

The source condemned "such brutal enforcement" and said the local government had blatantly trampled on and undermined the state's policies on religion.

A video circulated online shows an elderly Catholic tearing a seal from the gate of Gadazhang Catholic Church in Henan province.

Zhumadian has become the eighth out of 10 Henan dioceses suppressed since new provincial chief Wang Guosheng took office in mid-March. The others are Anyang, Luoyang, Xinxiang, Fuyang, Zhengzhou, Shangqiu and Kaifeng.

Targets have included Catholic and Protestant underground and open churches, while a deceased underground bishop's tombstone was demolished, unregistered underground priests have been driven away, and church properties have been confiscated.

On April 8, Henan Chinese Patriotic Catholic Association and Henan Catholic Administration Commission jointly issued a circular warning people to follow "the principle of religion and education separation" and the revised regulations on religious affairs. It said no religious venue should hold training sessions and no children should be brought to church by parents.

"It was only propaganda and education previously, but now there is a red line, a high-pressure line, so take it seriously," the circular said.

It warned that if anyone did not follow the rules, authorities would pursue the person responsible and close the venue.

Although official statistics are not available, the Christian population in Henan province is believed to be the second highest in the country after Zhejiang province.