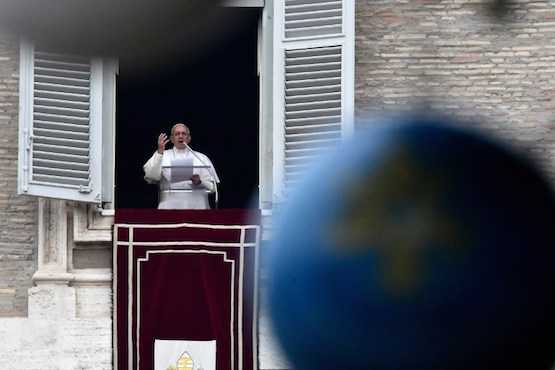 Pope Francis extolled the "heroic fidelity to Christ" of the Laotian martyrs during his Angelus in Saint Peter's square at the Vatican on Dec. 11. (Photo by AFP)

In 1953, communist guerrillas with the support of Vietnamese fighters invaded the northeastern part of what was then the French Protectorate of Laos.

In Easter of the same year, the guerrillas stormed the town of Sam Neua, resulting in the death of civilians and the start of the persecution of Christians.

A young Laotian priest, Joseph Thao Tien, chose not to flee but to stay behind with the people. "I am ready to lay down my life for my Laotian brothers and sisters," the priest was quoted as saying.

He was marched to a prison camp amid a wailing throng of people who were praying on the roadside. "Do not be sad, I'll come back," he assured them.

A year later, on June 2, 1954, Father Joseph Tien was shot to death when he refused to give up the priesthood and marry.

In a remote valley in central Vietnam, Father John Baptist Malo of the Society of Foreign Missions of Paris was also detained with four companions.

He died of exhaustion in 1954 en route to a prison camp.

The two priests were among 17 priests, catechists and laypeople who were declared martyrs by the Catholic Church on Dec. 11 in the Laotian capital of Vientiane.

They were killed between 1954 and 1970 during a period of anti-religious sentiment under the Pathet Lao communists.

During the Angelus on Dec. 11 in the Vatican, Pope Francis extolled the "heroic fidelity to Christ" of the Laotian martyrs.

'Heroic witnesses of the Lord'

Cardinal Orlando Quevedo of Cotabato, who presided over the beatification on the pope's behalf, said the church in Laos would celebrate the feast day of the martyrs every year on Dec. 16.

"We have to tell and retell their individual stories of heroism to every generation," he said in his homily.

Cardinal Quevedo urged the Catholics gathered in Vientiane on Dec. 11 to "honor [the martyrs] ... by living our faith the way they lived their faith, by loving the Lord the way they loved the Lord."

"Why were they determined to commit their lives to the Lord? Because they loved the Lord without limit," he said.

"In faith they committed themselves as priests and catechists to serving their brothers and sisters. Through faith, they shared in the sufferings of Christ," he said.

The prelate said that, because of the martyrs' service to communities of faith in the various towns and villages of Laos, the Lord gifted them with eternal life.

Inscribed in the annals of the church

Inscribed forever in the annals of the church will be the names of a diocesan priest, five priests of the Paris Foreign Missions Society, six missionaries of the Congregation of the Missionary Oblates of Mary Immaculate and five laypeople, including a 19-year-old catechist and a 16-year-old student-catechist.

Cardinal Quevedo said that Father Thao Tien and the lay catechists were young "but their heroic lives have indeed set an example of persevering fidelity to the Lord."

"Their individual stories are most inspiring and edifying," he said.

The young Kmhmu catechist, Luc Sy, a father of three, and his companion, Maisan Pho Inpeng, died in 1970 while giving catechism and tending to sick villagers.

In 1960, Hmong catechist, Thoj Xyooj went with Father Mario Borzaga on an apostolic trip to the villages. Both never came back.

In April and May 1961, Fathers Louis Leroy, Michael Coquelet, and Vincent L'Henoret were abducted in the province of Xieng Khouang and killed.

Father Lucien Galan, who started his missionary life in China, visited some isolated catechumens on the Boloven plateau in 1968 with a student, 16-year-old Khampheuane. They were killed on their way back to the town center.

"All of them were praiseworthy missionaries, ready for any kind of sacrifice. They lived in utter poverty and their dedication knew no limit," wrote one of the missionaries' companions.

"In those troubled times all of us, to some degree, aspired to martyrdom, wishing to surrender our lives totally to Christ," added the missionary.

Cardinal Quevedo said that even though Laos has "a very small flock" they should remember that, if the blood of martyrs is the seed of the church, "then we shall surely see the fruit of their spilled blood."

"The grain of wheat has fallen to the ground and has died. With the utmost certainty it shall bear fruit in the number of Catholics, in the quality of your faith and in the number of vocations to the priestly and religious life," the cardinal added.

There are about 60,000 Catholics in Laos in four apostolic vicariates, about one percent of the estimated six million population.