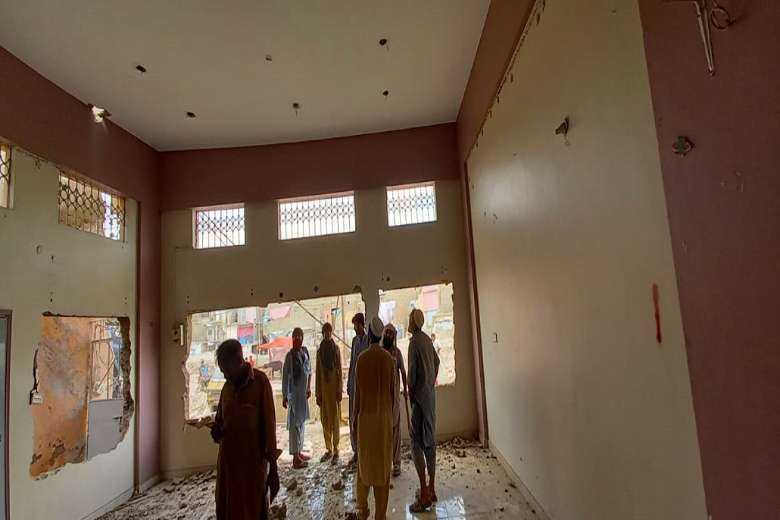 The anti-encroachment squad of the Sindh government returned on Aug. 24 and tore down St. Joseph Church despite protests from the Christian community. (Photo supplied)

A Catholic church serving more than 300 Christian families in Pakistan’s commercial capital of Karachi was demolished on Aug. 24 despite resistance from a civil society group and warnings from UN human rights experts.

The group said the anti-encroachment squad of the Sindh government tore down the building despite protests from the Christian community.

“This is how we treat our minorities. This is how we destroy what they built, their church, the Christians of Kausar Niazi. Watch and be ashamed Pakistan! Government of Sindh, you will have to pay,” said Abira Ashfaq, a member of Karachi Bachao Tehreek, while sharing a video of the demolition.

“Govt of Sindh liable under section 295 — injuring or defiling places of worship thereby insulting the religion of any class where such destruction would be considered an insult — two years in jail plus fine maximum sentence. We need the names of all your foot soldiers.

“We need to demolish their elite sense of worth. Their industries, their control of the state, their corruption and violence against the poor. We destroy them by shattering the fragile ugly veneer of the labels they wear, their Clifton and London homes, their massive vehicles.”

In June, UN human rights experts called on Pakistan to stop evicting close to 100,000 people living alongside the waterways

Mustafa Mehran, a lawyer, said two churches had already been demolished near Gujar Nala and this last one was remaining for the huge Christian population.

A day earlier, the group said it had managed to halt the demolition of the church.

“Thank you for participating in the campaign to #SaveStJosephChurch from demolition,” Karachi Bachao Tehreek said in a statement on Aug. 23. “Due to our collective resistance, the church did not get demolished today. But residents fear that it will get demolished in the coming days as soon as it loses traction on social media.”

Local officials claimed the drive was launched after a court order to remove encroachments near two narrow streams passing through Karachi, locally known as the Gujjar nullah and the Orangi nullah, in the wake of the 2019 flash floods.

The anti-encroachment action along Gujjar nullah, a wastewater stream, may affect up to 12,000 homes housing 96,000 people, according to UN experts. According to available data, more than 66,500 people have already been affected, with 4,900 houses demolished in Gujjar nullah and 1,700 in Orangi nullah.

In June, UN human rights experts called on Pakistan to stop evicting close to 100,000 people living alongside the waterways.

According to a statement by the Office of the United Nations High Commissioner for Human Rights, the anti-encroachment drive by city authorities was carried out "without adequate consultation with the affected residents, no relocation plan, and disparate and insufficient compensation for the displaced.”

“The legal basis for this mass displacement and the remedies available to those who are affected are unclear. What is clear is the horrid effect on the displaced population, putting many poor families out on the street in the middle of the Covid-19 pandemic,” the UN experts said.

"Many of the affected homeowners have established tenure through land leases or were connected to public utilities such as gas, water and electricity."

According to the UN experts, human rights laws do not prohibit resettling people who live along waterways if they are exposed to significant flood risk that cannot be mitigated otherwise.

"However, any project to reduce risks of natural disasters requires due process and full compliance with international human rights norms governing relocation and resettlement, and guaranteeing that no one is rendered homeless," they stressed.

“We are also extremely worried that intimidation and unlawful detention have allegedly been used on numerous occasions against residents protesting the demolitions, and even against their allies, human rights defenders. This raises additional concerns about access to justice and remedies for those concerned.”

The UN experts have urged Pakistan, which is a member of the Human Rights Council, to ensure that its policies and practices are in full compliance with international human rights standards governing relocation, evictions and internal displacement.