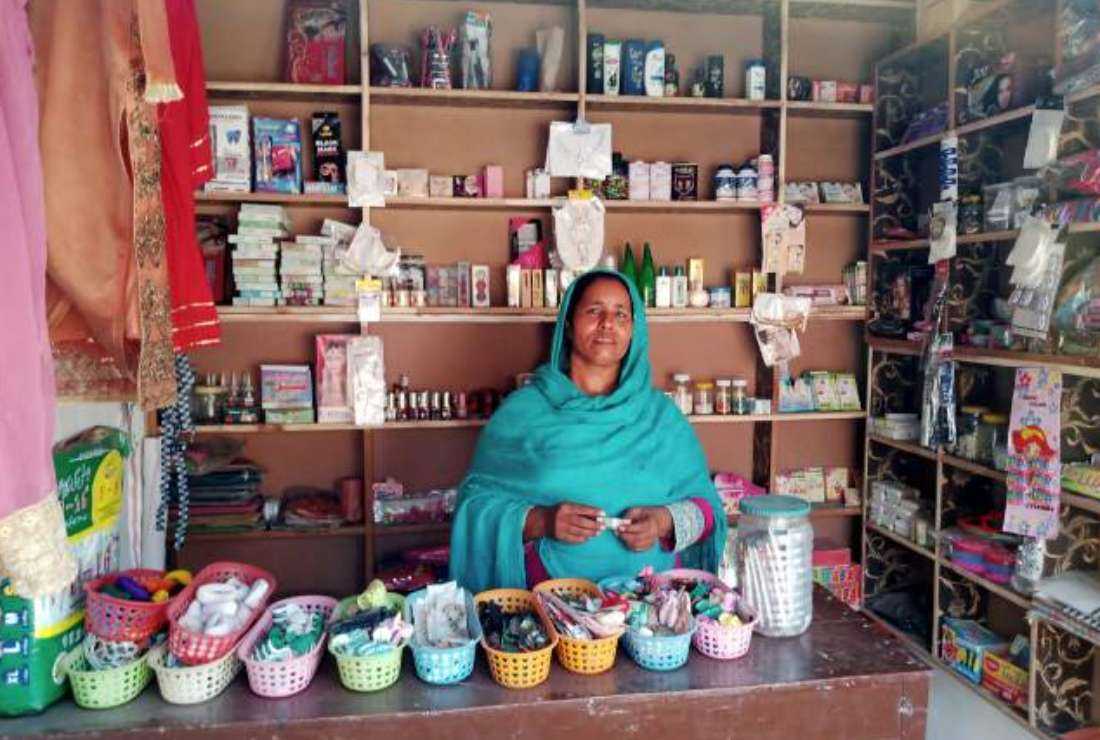 Mariam Bibi at the counter of her grocery store opened with an additional grant from the Association for Women’s Awareness and Rural Development (AWARD) based in Faisalabad in Punjab province, Pakistan. (Photo supplied)

After a long gap, Mariam Bibi bought new clothes for herself last Christmas thanks to the small business she started with the help of a Catholic organization working to empower rural women like her.

“I never cared much for my own needs and used to buy new clothes only for my three children,” says the 45-year-old who lives in Chak Jhumra, a village of poor Christians near Faisalabad in northeastern Pakistan.

What makes her even happier is being able to buy a laptop for her eldest son, a university student.

“It was the best Christmas we ever had,” Bibi told UCA News.

Bibi, a former tailor who occasionally sold unstitched fabrics, and her husband, Hanook Muzaffar, 50, who works as a supervisor in a hosiery company, could barely make ends meet with their paltry earnings.

Her life began to change in 2019, when Bibi received a grant of 25,000 rupees (US$109) to open a small shop inside her house selling clothes, jewelry and accessories.

"They inspire me to persevere in life"

The help came from the Association for Women’s Awareness and Rural Development (AWARD), a non-government organization (NGO) based in Faisalabad that helps low-income women from disadvantaged rural communities to improve their socio-economic conditions.

Bibi’s efforts saw her make good progress. Last July, she was among four women entrepreneurs shortlisted for additional support of 25,000 rupees, which she used to buy some furniture for her shop and open a grocery store she runs from an adjacent room.

Muzaffar said it was hard to pay for their children’s education with his salary of 30,000 rupees. "Now they get some pocket money from their mother’s income,” he said.

Impressed with the progress she has made, Muzaffar started helping her with purchasing stock from the cheaper wholesale markets in nearby cities.

Their son, Noman Gill, says his parents inspire him. The new laptop "has proven a blessing" for the 24-year-old pursuing an M.Phil. (Master of Philosophy) in chemistry.

“Thanks to my mother for the gift. Both of my parents used their savings to open two shops as well. They inspire me to persevere in life,” he said.

Bibi is now president of the women entrepreneurs’ group of Chak Jhumra and helps fellow AWARD beneficiaries run their businesses.

She also conducts Tuesday prayer meetings for group members which are followed by a business review and counseling session.

“Mariam and another woman from her group were shortlisted for a double grant under our sustainable livelihood program,” Christina Peter, executive director of AWARD, told UCA News.

Both women met all criteria for running a successful business along with record keeping, regular attendance at group meetings and training programs, said Peter, who leads the non-profit which began in 1994

"Almost 50 percent of the beneficiaries are Muslims"

The organization is presently managing 22 women’s entrepreneurship groups in Punjab province, most of them for uneducated rural women like Mariam.

Bibi is among 4,500 of the organization's beneficiaries spread over 100 villages across Punjab and Khyber Pakhtunkhwa provinces. They are helped in starting small ventures like growing vegetables, livestock care, poultry farming, tailoring units, grocery shops, beauty parlors and mobile repair.

The NGO works in close cooperation with Caritas Austria, Cordaid and local Church partners, extending help to women from all religions. Almost 50 percent of the beneficiaries are Muslims.

Mumtaz Bibi, a resident of village 118 JB Bathan near Faisalabad, used to work as a housemaid before being spotted by a visiting team from AWARD in 2021. She was among three Muslim women in the village provided with a home business grant of 28,000 rupees each.

Now she stitches quilts and pillows to support her husband, a laborer, and three school-going children.

“My husband was a mason but developed cataracts. I could earn only 8,000 rupees a month working as a maid in two houses. Now my earnings have doubled,” she said.

Bibi says that the people from AWARD “are good Christians who help poor women.”

“Thank God we now have enough wheat grain stored to feed the family for a year and could repair the boundary wall of our house. I could also pay for surgery on one of my husband's eyes last year,” she added.

Peter says the journey wasn’t easy. She remembers being suspected of converting Muslim women during her early visits to the villages.

“Due to my Western name, they thought I was there to preach Christianity," she said.

Another major challenge was the traditional mindset that confined women to their homes, and not providing them with education or a share in the property, she recalls.

Peter said the village women were totally dependent on male family members. A few Christian girls were lucky to get some education and become teachers. Otherwise, they did menial jobs as housemaids and working in shopping malls, or at brick kilns.

Most men among Punjabi Christians also have little or no education and work as unskilled farm laborers.

According to the Women’s Economic and Social Wellbeing Survey by the Punjab Bureau of Statistics and Punjab Commission on the Status of Women in 2017, some 50 percent of non-Muslim women never attended school, 13 percent studied up to primary level, 12 percent up to grade 10, and only 3 percent up to graduation or above.

“It is a story of extraordinary success against all odds. Regular financial aid is given to rural women, both Christian and Muslim. They make regular follow-ups to make sure the beneficiaries are using the money for the purpose the loan was given,” he said.

The AWARD executive director won the ‘Prize for Women's Creativity in Rural Life’ instituted by the World Women’s Summit Foundation (WWSF), for helping improve the quality of life in rural communities. In 2021, she was honored with the Lady of Lyallpur (since 1997 renamed as Faisalabad) Award by the Punjab governor.

In the past 27 years, besides initiating the micro-credit and small business grants program, she has also worked on removing gender inequality, changing rigid male mindsets and promoting education for children.