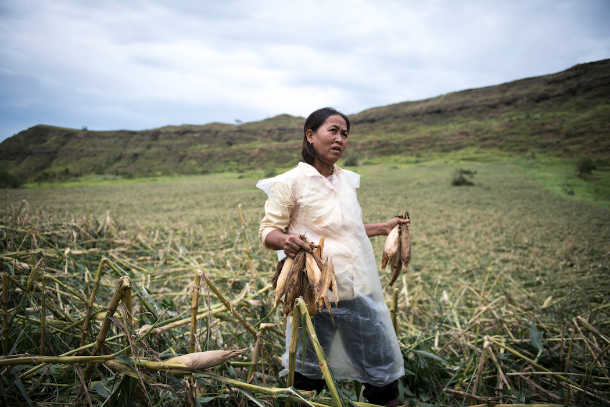 Farmer Josephine Dayag shows her corn plantation damaged by strong winds in the province of Cagayan Valley after Typhoon Mangkhut made landfall in the northern Philippines on Sept. 15. The Department of Agriculture said the typhoon damaged 1.22 million hectares of rice and corn. (Photo courtesy Richard Atrero de Guzman/Greenpeace)

Catholic humanitarian agencies from around the world have vowed support for Philippine relief and rehabilitation efforts in the wake of a powerful typhoon that devastated several northern provinces.

Caritas Internationalis in Rome has already launched an appeal to help finance relief operations for thousands of families affected by Typhoon Mangkhut.

"After the storm has passed people will need help to restore their livelihoods," the Catholic aid organization said in a statement.

Typhoon Mangkhut, the strongest to hit the country this year, reportedly affected more than a million people in 30 provinces across the country.

Richard Gordon, chairman of the Philippine Red Cross, said his organization is worried how families will cope over the coming weeks and months.

"Their income from farming and fishing will be drastically reduced, making it almost impossible for low-income families to repair their homes or even feed their families," he said.

Caritas assessment teams reported that there is an urgent need for food in coastal and interior areas.

The priest said that in his parish alone, 90 percent of the crops have been damaged.

The U.S. bishops' Catholic Relief Services is already on the ground providing assistance for families by distributing food and shelter, potable water and hygiene kits.

The Catholic Agency for Overseas Development in England and Wales has initially pledged about US$39,000 to help Caritas Philippines scale up its emergency response.

The typhoon, known locally as Ompong, was the strongest recorded anywhere in the world in 2018 and struck the northeastern tip of Luzon in the early hours of Sept. 15.

The region hardest hit, the Cagayan Valley, is the country's top corn producer and a major rice producer.

Typhoon Mangkhut struck just before harvest, affecting more than 80 percent of corn crops and causing damage to agriculture estimated at US$53 million.