Church should pray earnestly for reconciliation and unity between the two Koreas, say bishops 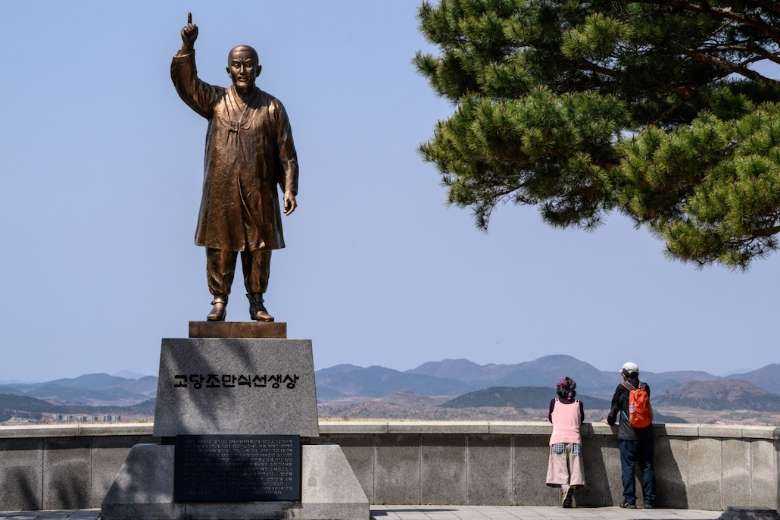 Visitors look towards the North Korean side of the demilitarized zone from the Odusan Unification Tower in Paju on April 15. (Photo: Anthony Wallace/AFP)

Catholics in Korea observe June 25 as the Day of Prayer for Reconciliation and Unity of the People aimed for peace and unity on the Korean Peninsula. Ahead of this year’s observance, the Catholic Bishops’ Conference of Korea issued a special message on May 11 as follows:

In June, when we remember the Sacred Heart of Jesus, we again welcome the Day of Prayer for Reconciliation and Unity of the People, where we must pray earnestly while looking back at the heartbreaking reality.

This day invites us to meditate deeply on the meaning of death on the cross for reconciliation and forgiveness to those of us who stand in front of the premise of unification with the memories of the unfinished war.

The current reality is that the north and the south are geographically close to each other, but the psychological distance feels so far away. Teacher Baek Beom Kim said: “It is a new independence movement in this era to unite our divided compatriots. Efforts for unification are the second independence movement.”

In this way, breaking down the walls between the two Koreas and becoming one is a task that must be put into practice and done with courage, enduring pain and fear. Although the situation of riots, wars, hostility and division are intensifying all over the world, the Church cannot turn away from or give up its mission for peace, harmony and unity on this earth.

After the outbreak of the war in Ukraine, Pope Francis exclaimed: "In the name of God, stop the slaughter! It shows that they still do not understand the lessons of the tragedy of the 20th century,” he said bitterly.

The unexpected war in Ukraine left a great sense of loss for all mankind longing for peace. The horrors of the war, when we have to look at the soldiers who were driven to the battlefield without knowing the English language, their loved ones, and the innocent people of God who lost their homes and sacrificed, our hearts are infinitely heavy.

War inflicts enormous damage on ordinary people in their daily lives and threatens their survival. Regardless of the times, the greatest victims of war are the underprivileged in society.

“My heart aches and tears when I think of the suffering of the people of Ukraine, especially the most vulnerable, the elderly and children,” Pope Francis' appeal resounds in the hearts of all those with good intentions. The church, strongly opposed to war, “forbids the deliberate destruction of human life. Because of the misery and injustice that all wars cause, the Church earnestly urges all to pray and act, that the good God may set us free from the bondage of long wars” (Catechism of the Catholic Church, 2307).

Therefore, we, the Catholic Church in Korea, should pray earnestly with all our hearts for reconciliation and unity between the two Koreas, and for an end to the tragic war in Ukraine.

The facts of the arms race

Despite catastrophes such as Coivd-19, countries are making, buying and stockpiling more weapons for killing and destruction under the guise of protecting themselves.

Recently, the Stockholm Institute for International Peace Studies reported that global military spending reached an all-time high last year. Russia's annexation of Crimea in 2014 ignited a new fire in the arms race in Europe, and the North Korean nuclear issue and the US-China conflict in East Asia were also factors that significantly increased the armaments of each country in the region.

Amid this vicious cycle of arms race, the Ukrainian war that broke out is exacerbating the situation. Our country is not free from the vicious cycle of an arms race that cannot prevent war. Due to the North Korean nuclear issue and instability in Northeast Asia, the recent massive increase in national defence spending is also fuelling the arms race in the region.

The arms race must be stopped, reminding us of the Church's teaching that it is a "severe plague of mankind" that inflicts great scars on the poor and the weak. During the Cold War and the military confrontation of the last century, the Church warned: “If the arms race continues, we must fear that one day we will bring about and end all kinds of horrific disasters for which the means are already in place” (Constitution for the Pastoralte, no. 81).

As the world complains about security insecurity, military tensions on the Korean Peninsula are rising more than ever. North Korea has recently resumed intercontinental ballistic missile test firing, which clearly violates UN Security Council resolutions. As a result, peaceful resolution of the Korean Peninsula issue has become increasingly difficult.

If North Korea's military action continues to increase its level while the world's attention is focused on the Ukraine war, a backlash from the international community, including the United States and Japan, will be inevitable.

In this uncertain world situation, I hope that the two Koreas will communicate and take another step toward peace towards unification based on the trust-based policy toward North Korea based on trust in the newly launched government. Just as strengthening military power is never the right option, the governments of the two Koreas must find alternatives for peace on the Korean Peninsula and in northeast Asia. True security is not built by military confrontation. Peace is achieved through mutual trust through dialogue and communication. This is the active peace that the Church seeks.

'But the house of Judah will have pity and will save them as the Lord their God. Neither bow nor sword nor war horses nor cavalry will save them' (Hosea 1:7).

Believers who follow the peace of Christ must get rid of the illusion that they can keep peace with advanced weapons and military power. The Old Testament prophets believed and taught in God's peace that transcends human violence. A church that believes in the power of God cannot give up hope for true peace beyond the 'balance of power'. Because the peace of Christ achieved through the cross is the very essence of our faith.

“He will destroy the chariots from Ephraim, and the horses from Jerusalem, and he will break the bow of war, and he will proclaim peace to the nations. His reign shall be from sea to sea, and from river to the ends of the earth” (Zechariah 9:10).

The church that believes in the risen Lord earnestly desires the peace of Christ to be established on this earth. The realization of national reconciliation and unity is the responsibility of us living on this earth today. In a world where peoples and nations are at odds with each other, if our people, brothers who speak the same language, become one through reconciliation and unity, a new history of overcoming division will be written.

Let's unite our hearts and work out the love, forgiveness, and true peace that Christ showed us on the cross. At this moment, I pray that the weak and the poor who suffer from this unfortunate war, and all those who have been wounded in the whirlwind of conflict, will find hope.

I pray that humanity and the Korean Peninsula will be at peace through the intercession of Our Lady, who was conceived without original sin.