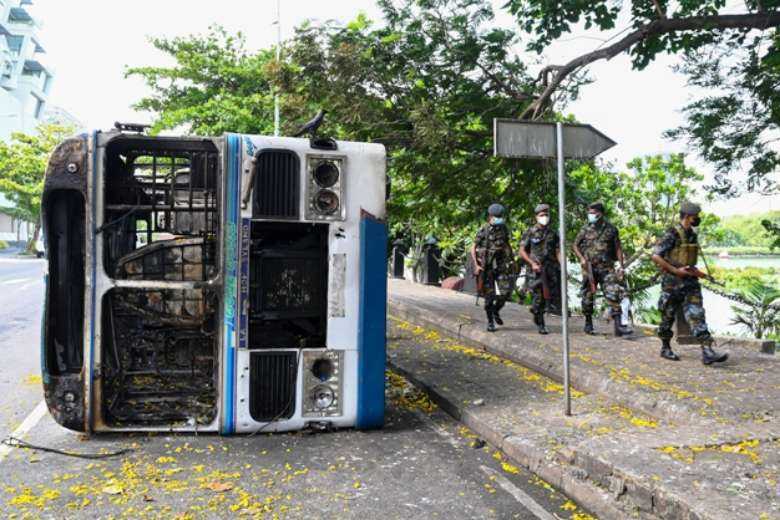 Soldiers walk past a bus set alight during demonstrations against the government over Sri Lanka's crippling economic crisis in Colombo on May 11. (Photo: AFP)

Catholic bishops in Sri Lanka have called for the formation of an interim government to ensure the protection of life and property, freedom of expression and movement.

“Honest, competent and principled civilians should be placed in key responsible positions in the government to carry out their service to the country without any political bias and interference,” said Bishop J. Winston S. Fernando, president of the Catholic Bishops' Conference of Sri Lanka (CBCSL).

Central Bank of Sri Lanka governor Nandalal Weerasinghe warned that the economy could “collapse beyond redemption” unless a new government was appointed within a couple of days to restore political stability.

Opposition leaders have agreed to form an interim government but insist President Gotabaya Rajapaksa must first step down.

In a statement on May 11, the CBCSL underlined the need for a radical change in the system of governance as the island nation faces tense days under a curfew with troops out with shoot-on-sight orders.

The CBCSL further demanded that those engaged in corruption, depriving people and the country of genuine development, must be investigated and their financial assets seized before allowing them to leave the country.

“We call on all those who struggle and protest never to turn to violence, while we ask the police and the security forces to protect people and never to attack peaceful protesters"

The statement, signed by Bishop Fernando and Bishop J.D. Anthony, auxiliary bishop of Colombo, insisted that “the basic needs of all the people be taken care of immediately” as they were greatly harassed by the non-availability and skyrocketing prices of essential goods.

The worsening financial crisis since March has led to shortages of fuel, food and medicines among other essentials, resulting in repeated blackouts and increasing hardships for the island’s population.

The bishops said: “We call on all those who struggle and protest never to turn to violence, while we ask the police and the security forces to protect people and never to attack peaceful protesters as it is their democratic and legitimate right to do so.”

Meanwhile, the Methodist Church has unequivocally condemned the well-orchestrated violence unleashed on peaceful protesters since May 9.

“We call on the president to appoint an independent group of eminent persons to impartially inquire and to bring to task those behind the initial attacks, which unfortunately resulted in the mayhem,” it said in a statement.

The National Christian Evangelical Alliance of Sri Lanka also called for stern action against those responsible for attacks on peaceful protesters and urged all citizens to exercise restraint to stem the tide of violence.

Pope Francis has urged Sri Lankan authorities to listen to the hopes of the people and respect human rights and civil liberties.

“I offer a special thought to the people of Sri Lanka, in particular to the young, who in recent times have made their cry heard in the face of the country’s social and economic challenges and problems,” the pope said while urging all sides to maintain a peaceful attitude.