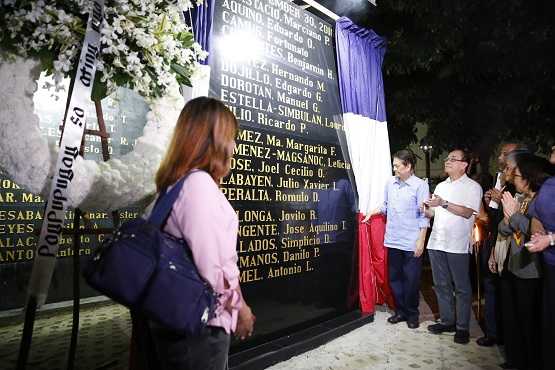 The name of the late Bishop Julio Xavier Labayen of Infanta is etched on the Wall of Remembrance at the Philippines' Monument of Heroes. (ucanews.com photo)

A Catholic bishop was among 19 people honored as Philippine "heroes and martyrs" for their role in resisting repression during Ferdinand Marcos' dictatorial rule.

The late Bishop Julio Xavier Labayen of Infanta was among those memorialized as "real heroes" for resisting repression and for fighting for human rights.

Their names were etched on the Wall of Remembrance at the country's Monument of Heroes during simple ceremonies on Nov. 30.

During the years of martial law, Bishop Labayen led activist priests, nuns, and seminarians who worked for human rights and supported farmers and tribal communities.

The prelate who died in April 2016 was known internationally for speaking about the Philippine situation under martial law and the church’s role on political issues and social transformation.

One of Bishop Labayen’s most significant contributions during the years of the Marcos dictatorship was the establishment of the church's social action network in all dioceses.

The bishops’ conference appointed the prelate head of the National Secretariat for Social Action, Justice and Peace, which coordinated all the social action centers.

"[Bishop Labayen] embodied the precept of preferential option for the poor, making it his life vocation to be a builder of the 'Church of the Poor,'" said Carmencita Karagdag, a member of the World Council of Churches.

While the church hierarchy remained silent for the most part of the dictatorship, Bishop Labayen was among the first Catholic bishops to condemn the atrocities of martial law.

Bishop Labayen was born to a landed clan in the central Philippine province of Negros Occidental. While administering the family estate, he witnessed the hardships of workers in sugar plantations.

"My family background helped me to understand the social teachings of the church," he said in one of his interviews.

"It was then that I felt a preferential love for the poor growing within me with great meaning," he added.

When he became bishop, he dedicated his ministry to what he described as a church that has a "special concern and love for the poor masses, for the victims of injustice, and for those whose dignity and rights are trampled upon."

During the martial law years, Bishop Labayen was one of the "Magnificent Seven" of the church who wrote an open letter to the dictator Marcos in 1973 to condemn human rights violations.

Bishop Labayen preferred to work quietly and helped to form and guide church groups and grassroots organizations that worked against torture, illegal arrests and detention, and other social issues.

"During his time, the church became a sanctuary for people who were strongly opposing violations of the Marcos regime," Jalandoni told ucanews.com.

After the ouster of Marcos in 1986, the bishop continued to be a strong voice against rights abuses.