Catholic judge Richard Malanjum has earned a reputation for trying to bring justice to the poor. (Photo supplied)

Richard Malanjum has become the first person from the two predominantly Christian states on the island of Borneo to become Malaysia's chief justice, the nation's highest judicial position.

Malanjum, 65, a Catholic from the Kadazandusun community in Sabah state, acted as the chief judge of Sabah and Sarawak after being elevated to the Federal Court in 2005.

"He has done a lot of work on trying to bring justice to the poor," said a friend who declined to be named. "The native courts that are based in the rural areas of Borneo are his brainchild. He once explained to me that justice was hard to come by for the poor and it had been occupying his mind for a long time."

Malanjum’s appointment is seen as a decisive break from the past following the sacking of several independent-minded judges in 1988 and a raft of subsequent decisions in favor of the government.

The appointment also signifies that Malaysia's new rulers, who ousted the long-ruling Barisan Nasional coalition government in May, are on a reformist course.

The nation's judiciary, under the previous administration, acquired a reputation as pro-Islamic with several controversial rulings that appeared to contravene the constitution and alarmed non-Muslims.

One decision resounded around the world: a court ruled in 2013 that non-Muslims were prohibited from using the word Allah to refer to God.

The controversial ruling stated that the term Allah must be exclusive to Islam as to allow otherwise could result in public disorder.

Christians argue they had used the word, which entered the Malay language from Arabic, to refer to their God for centuries.

Though Malanjum's tenure is potentially short — he reaches the normal retirement age of 66 in October — it has been the practice to extend the terms of the nation's top judges for an extra six months, so he could serve until April. Malaysia's Islamists are down but not out 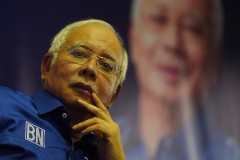 Malanjum was educated by La Salle brothers at La Salle High School in Kota Kinabalu, the capital of Sabah state. Their influence was plain to see as he is known to have been in frequent touch with the brothers for years after they retired.

He started his career with the Education Department before moving on to several other government departments.

In 1972, he graduated from a local institute as an external student of the University of London and obtained a degree in law in 1975.

He then served at the Sabah Chief Minister's Department and was assigned as deputy public prosecutor at the Sabah state attorney-general's chambers.

He pursued studies in London and was admitted to the English Bar before returning to the government service in Malaysia.