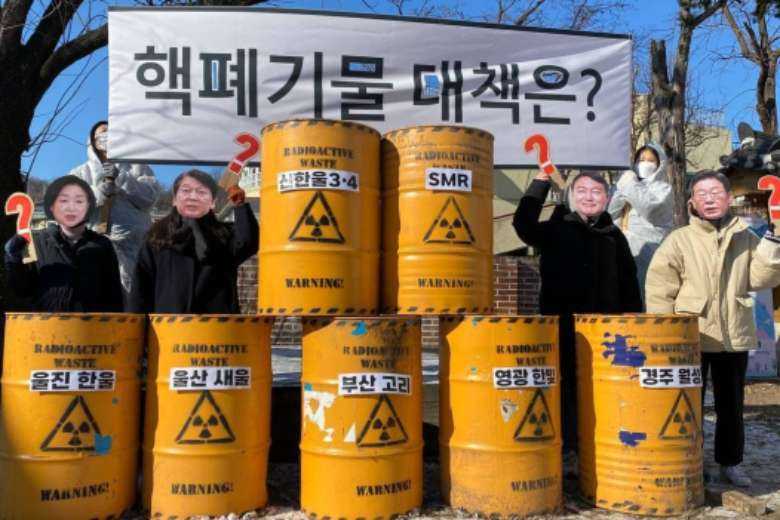 A national coalition comprised of Catholic organizations, civil society and environmental campaigners in South Korea has called on presidential hopefuls to make concrete promises to make the nation nuclear-free.

The Election Coalition for Nuclear Elimination 2022, formed last month, demanded presidential candidates from all political parties to include in their election manifesto a range of denuclearization policies.

The coalition, which includes 10 church-based groups such as Catholic Climate Action, made the call during a press conference and demonstration at the premises of the Environmental Movement Federation in capital Seoul on Jan. 11, Catholic Times of Korea reported on Jan. 23.

It presented seven denuclearization policies political parties should include ahead of the presidential election on March 9.

The policies are: implementation of the early closure and denuclearization of nuclear power plants; formulation of an effective high-level nuclear waste management policy; strengthening nuclear power regulations; expansion of regional authority and institutionalization of citizen participation in nuclear power management; preparation of countermeasures against radiation impact and damage; preventing the discharge of radioactive-contaminated water from Fukushima into the ocean; the suspension of construction of the Shin-Uljin-Singapyeong ultra-high voltage transmission tower and the revision of the Songju Act (Act on Compensation and Support for Areas Surrounding Transmission and Substation Facilities).

The coalition that has 69 members also sent a questionnaire to presidential candidates asking if nuclear disarmament would be a major policy of the next government.

In the 20th presidential election, voices are getting louder to promote nuclear power as an alternative on the grounds of the climate crisis and carbon neutrality

The group said South Korea cannot choose to adopt nuclear power as an alternative amid the climate crisis despite popular demand.

The Solidarity for Nuclear Disarmament group said it is concerned that presidential candidates are making remarks about increasing nuclear power in the country.

Major political parties have chosen candidates to replace the country’s second Catholic president Timothy Moon Jae-in the upcoming election. Under the South Korean constitution, a president is allowed only one single five-year term.

Other notable candidates include Sim Sang-jung from the Justice Party and Ahn Cheol-soo from the People Party.

Despite his relative popularity, President Moon has faced criticism from Catholic and environmental groups for his attempts to revive the country’s nuclear power plants to overcome a severe electricity deficit.

Though his government adopted a nuclear phase-out policy as a mainstay of national power policy, it had little success while pursing renewable energy options in recent years.