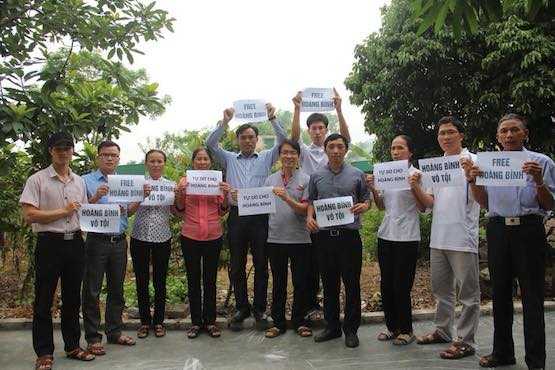 Two Catholic environmental activists have been jailed in Vietnam after helping hundreds of fishermen to sue a Taiwanese steel plant for polluting coastal waters.

Hoang Duc Binh, 35, was sentenced to 14 years in prison for "resisting officials on duty" and "abusing democratic freedoms to infringe the interests of the state, the legitimate interest and rights of organizations and citizens."

Fellow activist Nguyen Nam Phong, 38, was also charged with opposing officials on duty and was sentenced to two years in jail.

Both defendants were tried on Feb. 6 by the People's Court in Dien Chau district of Nghe An province.

Binh's 10 relatives were detained and allegedly beaten by police in plain clothes when they asked to attend the trial. Only Binh's mother and Phong's wife were allowed to enter the court.

"The court violated basic regulations and showed no evidence linking the defendants to the crimes. The court sentenced them based on accusations made by the procuracy," said Ha Huy Son, one of three lawyers supporting the defendants.

Son, one of a few lawyers who dare to defend rights activists in Vietnam, said the defendants asked the judge to provide videos and proof but their request was denied. The judge used police as witnesses at the trial, he added.

"No courts in the world, except for those in Vietnam, sentence people without proof at trial," Son said. "I affirm that the court was unfair and sentenced the citizens wrongly. Binh and Phong are innocent."

The U.S. State Department said in a statement that it was "deeply troubled" by the convictions and sentences passed on Binh and Phong.

"The trend of increased arrests, convictions and harsh sentences of peaceful activists since early 2016 is very concerning," it said.

In February 2017, Binh and Phong joined hundreds of people travelling from Song Ngoc parish to file a lawsuit against the Formosa plant at the People's Court in Ky Anh town in neighboring Ha Tinh province.

The newspaper said the group caused a traffic jam on a main road. Binh told Phong, who was driving their car, not to open the car's door at the police's request.

Father John Baptist Nguyen Dinh Thuc, who led the procession, said it was right that Phong refused to open the car door to protect people in the car, including two nuns, because local authorities and security forces had blocked the road and brutally attacked hundreds of people. Some security officers broke the car's windscreen wipers and hit the car.

Father Thuc, an environmentalist, said he twice appealed to the court to serve as a witness at the trial but he never got an answer. He also asked the court to free the two innocent victims unconditionally.

Activists said the 14-year jail term for Binh, one of the harshest sentences to have been imposed on an activist in Vietnam, aims to threaten people not to stage protests against Formosa, which is supported by the government.

There are about 550,000 Catholics from Vinh Diocese, which covers the provinces of Nghe An, Ha Tinh and Quang Binh.