Yip Po-lam (third from left) has been jailed for two weeks for protesting about a development plan in Hong Kong. (Photo supplied by Justice and Peace Commission of Hong Kong Diocese)

A prominent Catholic activist has been jailed after a Hong Kong court refused to hear her appeal against a conviction for causing public disorder during demonstrations against alleged land grabbing that displaced villagers and caused environmental damage.

Yip Po-lam of the Justice and Peace Commission of Hong Kong Diocese took part in a protest outside the territory’s Legislative Council five years ago.

Her jailing has brought an outcry from the Catholic Church and a labor union.

“We regret that the Court of Final Appeal has rejected the appeal,” Alexander Yu, chairman of the Hong Kong Catholic Institution Staff Association, said on March 28.

The court heard that Yip, initially one of four defendants, had clearly acted in a disorderly way and doubts were raised by the prosecutor over whether her methods were reasonable after protesters refused to obey instructions issued by Legislative Council staff.

The case is seen as a prelude to further hearings slated for next month regarding the Umbrella Movement and pro-democracy activists who brought the central business district of Hong Kong to a standstill for three months in 2014.

Protesters advocated full and free elections for Hong Kong in line with a treaty struck between Britain and China before Hong Kong rule was passed to Beijing in 1997. Beijing was angered by the protests.

Yip was jailed on March 27 for two weeks, which Yu said was “too heavy for someone who staged a peaceful protest.”

Two other protesters were sentenced to one and three weeks in jail but one has fled the territory and was sentenced in absentia.

Protesters had claimed the Northeast New Territories Development Plan violated the rights of locals who were not adequately compensated for damage to their farmland. 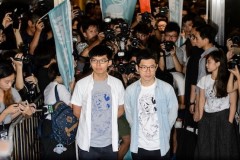 Yu said Yip had lived up to her faith as a Catholic.

“We agree with Yip’s action as her motives were genuine when calling on the general public to examine the injustices of the development plan,” he said. “The social teaching of the Catholic Church points out that our love for neighbors urges us to seek social justice.”

His sentiments were echoed by Jackie Hung of the Justice and Peace Commission. She stressed that the demonstration was peaceful, adding that she feared that jail time for peaceful protests, once tolerated in Hong Kong, was now on the increase.

“Oppression by the government will not happen less. We have to be ready … and continue to fight for justice,” she said.