Catholics from Bui Ngoa Parish pray for activist Hoang Duc Binh who was detained for 90 days on May 15. (Photo by Huy Khang)

Police attacked demonstrators in northcentral Vietnam while they were protesting the detention of a Catholic environmental activist.

Police attacked protesters who were demanding an explanation for the detention of environmentalist Hoang Duc Binh outside the Public Security Department of Dien Chau district on May 15, said Father John Baptist Nguyen Dinh Thuc of Song Ngoc Parish.

Police had earlier told protesters that Binh had been moved to the provincial police station and then ordered the crowd to disperse.

The demonstration was a reaction to the news of Binh being arrested while traveling by car.

Father Thuc, who was in the vehicle as well, said traffic police stopped them and "many more police rushed to violently drag Binh out of the car and take him away."

The priest, also an environmentalist, said some eyewitnesses were angry and complained about the abduction via social media. Other locals rushed to the scene and blocked the road, said Father Thuc. Some people found and detained four plainclothes police officers who were trying to sow disorder among the crowd.

"I moved the [plainclothes police officers] away from the angry crowd and took them to the place where they parked their motorbikes," Father Thuc said in his report on May 16.

Father Thuc said the crowd then walked to the Public Security Department headquarters where some of them were later set upon by the police. 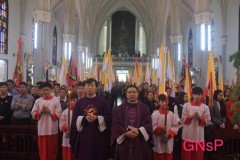 Hoang Duc Binh (right) and two other activists pose for a group photo on Sept. 11, 2015. The Catholic activist was grabbed by police and detained on May 15. (Photo by Son Le Van)

Arrested without any legal proceedings

Father Thuc accused the police of "violating laws" because they arrested Binh without any legal proceedings.

State-run Nghe An newspaper reported that Binh was arrested for "obstructing officers in the performance of their duties and abusing democratic freedoms to infringe state interests." The report said he will be detained for 90 days while being investigated.

Binh was also accused of being "linked to reactionary groups abroad."

Activists said Binh was providing legal advice to people suing Formosa steel plant that was responsible for a marine pollution disaster in April 2016. Binh posted reports of fishermen made destitute on social media, attended mass protests and drew attention to the government's unfair compensation to victims.

Since April, state-run media has intensified a smear campaign against Catholic priests and environmental activists in Ha Tinh and Nghe An provinces.

Since early this year, the government has arrested two activists and harassed many more for campaigning against Formosa.

Toxic waste, including phenol and cyanide, from the Taiwanese-built steel plant in Ha Tinh province poisoned water along a 200 kilometer stretch of coastline killing hundreds of tons of fish.

On May 18, state-run Tuoi Tre newspaper quoted Deputy Prime Minister Truong Hoa Binh as saying fishermen should not catch fish in deep water within 20 nautical miles from the coast in the four provinces until the Ministry of Health finds it safe to eat and maritime resources are restored.