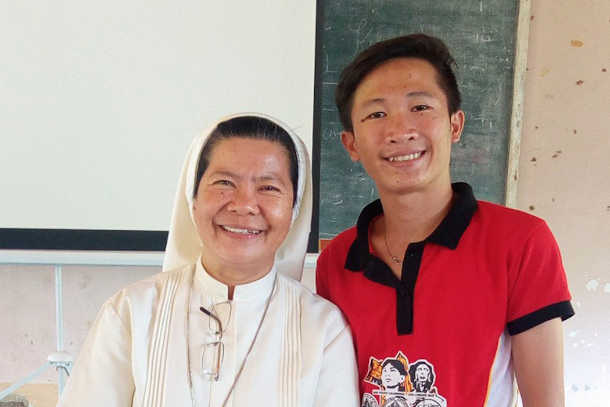 An 18-year old catechist and his 15-year old cousin died in a bomb explosion in the southern Philippine town of Isulan in Sultan Kudarat province on Sept. 2.

Catechist Jun Mark Luda and Marialyn Luda, were killed and at least 14 others were reported injured in the blast at an internet cafe in the town.

The attackers, thought to be an extremist group opposed to a peace deal with Manila, came five days after another bomb explosion killed three people and injured 36 others in the same town.

Police spokesman, Aldrin Gonzales, said the blast had all the hallmarks of a "terrorist attack."

Schools were closed Sept. 3 to allow police and the military to focus their efforts in looking for the perpetrators.

Sister Alice Original of the Oblates of Notre Dame asked for prayers for the victims.

She described Luda as "an active youth catechist" who finished his basic catechism orientation seminar in July.

Luda was supposed to teach catechism classes in public schools in town this year during his free time.

"He was smart and talented. His jolliness was contagious. We are saddened by his death," said parishioner Josephine Patosa.

Church leaders condemned the bomb attack and urged government and pro-peace deal rebel groups to bring the perpetrators to justice.

Cardinal Orlando Quevedo of Cotabato condemned the blast, saying religion was being distorted to commit "brazen crimes that cry out to heaven."

Archbishop Martin Jumoad of Ozamiz described the attack as "evil."

He said other recent attacks in the region "destroy the harmony between Muslims and Christians."

On Sept. 3, authorities in Manila appealed to people in the southern Philippines for support in the hunt for the attackers.

"Justice will be more swiftly served to the victims if people help us in this fight by reporting the whereabouts of these terrorists discreetly or otherwise," said Col. Edgard Arevalo, a military spokesman.

He said security forces "will address this vile aggressions with vehement counter-action."

"With the support of the community, we will get these criminals. With the help of local residents, we can potentially prevent any repeat [of the bombing]," he said.

The military has declared a "lockdown" of the town for the possible apprehension of the bombers.

Bong Sarmiento contributed to this report from Cotabato City.