Archbishop Hyginus Kim Hee-joong of Gwangju (left) pays a visit to 14 catacomb murals installed on the wall of Catholic Park Cemetery in Damyang county of Gwangju. (Photo: Archdiocese of Gwangju)

The Archdiocese of Gwangju in South Korea has installed 14 catacomb murals in a Catholic cemetery to help the faithful pray and meditate as well as to learn about the early days of the Church and the persecution of Christians.

Archbishop Hyginus Kim Hee-joong of Gwangju blessed the murals on the wall behind Catholic Park Cemetery in Damyang county of Gwangju on All Souls' Day on Nov. 2.

The initiative for catacomb murals is the brainchild of Archbishop Kim, who took photos of catacombs in Rome when he studied and obtained a doctoral degree in church history from the Pontifical Gregorian University from 1976-86.

His photos have been improved by a team of professionals and transferred to a tiles format.

Father Andrew Heo Woo-yeong, director of the cemetery, said the murals will help the faithful know about Christians of the early Church and how they gathered secretly to avoid persecution from rulers.

During the early days of Christianity, catacombs served various purposes apart from burial

In particular, Christians at that time left many murals and sculptures in the catacombs expressing their confession of faith that they would overcome death and eventually be resurrected.

The priest also said that under the guidance of Archbishop Kim the archdiocese completed installation of the catacomb murals before All Souls' Day.

The mural of Mother and Child in the catacomb is the first appearance of the Virgin Mary in the history of the Church, Archbishop Kim said.

Catacombs are believed to a Roman tradition and a significant part of early church history. The word "catacomb" derives from the Latin catacumba, which refers to an underground cemetery composed of galleries or passages with side recesses for tombs. 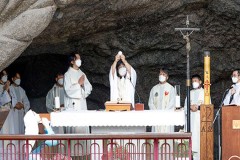 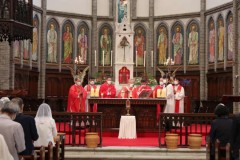 According to Catholic history, the first catacomb was located under the Basilica of Saint Sebastian on the Appian Way near Rome. It is famous for being the temporary resting place of the apostles of Jesus — Saint Peter and Saint Paul.

During the early days of Christianity, catacombs served various purposes apart from burial. Some catacombs were gathering halls for Christians seeking to escape persecution from rulers and barbarian invasions. Others served as shrines dedicated to saints and martyrs where pilgrims paid regular visits.

However, historians say, catacombs were not an exclusively Roman tradition. The custom of burying the dead in underground chambers has been common in places including Malta, Sicily, Naples, Lebanon and Egypt.

Installing catacomb murals in Korea has great significance as Catholicism there faced persecution and martyrdom from Buddhist rulers.

Christianity came to Korea during the Japanese invasion in 1592 when some Koreans were baptized, probably by Christian Japanese soldiers. It started as an indigenous lay movement. Korean Yi Seung-hun, who was baptized in China in 1784, began to baptize others that year.