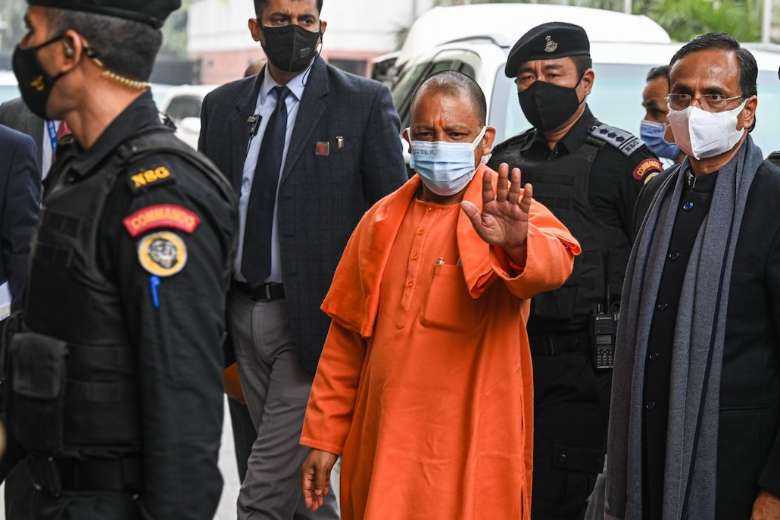 The return of caste politics in India's politically crucial and most populous state, Uttar Pradesh, shows Indian democracy still has miles to go to mature.

In the election season in India — fascinatingly described as the world's largest democracy — the old political menaces of defection and casteist games are back to the fore.

As many as 10 provincial legislators, members of the Legislative Assembly, including three ministers, have deserted the Bharatiya Janata Party (BJP) ship in Uttar Pradesh. The northern state sends 80 lawmakers to parliament and thus ultimately decides who will rule India.

On the defectors' list are a few eminent casteist players like Swami Prasad Maurya, who belongs to a politically powerful Other Backward Caste (OBC) group.

The Mauryas along with such segmented groups as the Kushwahas, Sakhya, Koeris, Kachhi and Sainis make up about 9 percent of the OBC population in Uttar Pradesh.

Another prominent leader who defected from Prime Minister Narendra Modi's BJP party to the "socialist" Samajwadi Party is a Saini.

It was a symbolic and crucial success for the BJP certainly. Do not forget caste is a Hindu and Indian reality even afflicting non-Hindus

About 20 percent of the OBCs in Uttar Pradesh are Yadavs and are known for being loyal to the Samajwadi Party that was floated in 1990 by former defence minister Mulayam Singh Yadav. Mulayam is also a former chief minister of the state and now his son Akhilesh Yadav heads his party.

The Samajwadi Party, which hopes to make a dent among the Yadavs, other OBCs and Muslims, has taken the fight to the BJP camp in elections in Uttar Pradesh beginning next month.

"The so-called 'jumping of ships' by some of these casteist leaders is politically significant. Call it sheer opportunism, but these leaders can sense trouble and the public mood and generally switch over to the ruling side either in Uttar Pradesh or even in the neighboring state of Bihar," analyst Vidyarthi Kumar told UCA News.

"The desertion has hit the BJP on its soft corner. Non-Yadav OBCs make up a sizable voting bloc in Uttar Pradesh as five years ago an overwhelming 60 percent of non-Yadav OBCs voted for the BJP and gave it a record success of 300-plus seats."

The game has just begun. On Jan. 19, Akhilesh Yadav lost his own sister-in-law, Aparna Yadav, who joined the pro-Hindutva party. Aparna comes from chief minister Yogi's Bisht caste but married to Yadav family.

"It was a symbolic and crucial success for the BJP certainly. Do not forget caste is a Hindu and Indian reality even afflicting non-Hindus. PM Modi is an OBC himself from Gujarat," says Tushar Bhadra in Varanasi.

Moreover, he says, over the years the BJP has ensured better representation of OBCs and Scheduled Castes (Dalits) in official/constitutional positions, something in which the pro-upper caste BJP lagged for years.

In other words, caste remains a major factor in India's polity and the tom-toming (drum beating) of inclusive growth by the prime minister and other BJP leaders over the last seven years is perhaps just lip service and something only on paper.

"In the name of Hindutva politics, the BJP has claimed it has done away with caste politics. This is an absolute fallacy. Instead it encouraged caste politics by giving importance to some individuals of various caste groups without bothering about talent and performance,” says businessman Naushad Khan.

"I hail from western Uttar Pradesh. The BJP's caste management has been superb since 2014. It ensured all upper-caste Brahmins and others stick to it. Thus, though upper caste numbers or dominance have been reduced to an extent, the BJP has emerged as the most socially representative party, taking care of smaller caste groups like barbers, but has kept Muslims at bay."

However, certain people counter some of these claims. Not long ago Western scholars Christophe Jaffrelot and Gilles Verniers said in their thesis that with the rise of the BJP, the last decade has seen the “return of the upper castes” and the “erosion” of OBC representation.

Nevertheless, caste management during election season is nothing new in India. During the early decades of India's political history, the Congress party dominated the scene in Uttar Pradesh and elsewhere, having won the trust of upper caste Brahmins, Kshatriyas and Thakurs along with minorities and Dalits.

In the 1990s, the Congress base was shaken when OBC and Dalit leadership emerged in the form of the Samajwadi Party and Bahujan Samaj Party (BSP) claiming to be the party of the Scheduled Castes and Dalits.

But by 2014, the clever use of “Hindu unity” pushed by Narendra Modi and his trusted lieutenant Amit Shah diluted the caste narrative.

Even as people know the farmers have suffered and there was joblessness and inflation, in the election season everyone is talking about castes

This had changed the game yet again and there was division amongst Dalits and OBCs. The non-Yadav OBCs and a section of Dalits backed the BJP.

These factors largely helped the BJP win the 2017 assembly elections in Uttar Pradesh and yet again repeat the same magic at the 2019 parliamentary polls.

But this time around, cashing in on the anti-incumbency mood and winning over key caste groups, the Samajwadi Party is posing stiff competition to the BJP.

There is another caste group called the Jats — essentially a farming community — and they are influential in pockets of western Uttar Pradesh and some clusters and smaller towns adjoining capital Delhi.

"When farmers' agitation was at its peak in 2021, no one presumed fragmented caste games would return to Uttar Pradesh yet again. But politicians have brought it," says Bhadra. "Even as people know the farmers have suffered and there was joblessness and inflation, in the election season everyone is talking about castes."

"Indian democracy has survived and it is an achievement, but it has typically moved around caste factors. Other factors like ‘which leader will help my relatives and communities’ and so on remain dominant. Therefore, even among Muslims, the voters often cannot make up their minds and the votes are split. This helps the BJP. These issues are prevalent even in northeastern states such as Manipur," he says.

"In insurgency-hit Manipur, people have serious issues with the draconian Armed Forces Special Power Act. But when it comes to voting, the AFSPA is not deciding which party is in its favor or against it. In smaller states like Manipur and Goa, where there are a large number of Christian voters, people will decide on factors like freebies and which leaders can help me and my family."

Democracy and elections to people are essentially self-centered, he says.

Bhadra endorses these views in principle and says there is a vicious cycle about these caste factors and selfishness in Indian politics.

In Christian states like Nagaland, people did not mind voting for BJP candidates in 2018 and elections are expensive affairs in the northeast," he says.

"No one goes to the voting center with issues in mind like what will be the economic policy of the country. They raise mundane issues like drains in the colony, jobs for my son and free medical facilities for himself and his family," Vidyarthi Kumar says.

"Democracy is thus yet to mature in more ways than one."

The caste games persist. The BJP on Jan. 19 also struck deals with two smaller caste-based parties — the Nishad Party and Apna Dal — and both will get to field 15-20 candidates as part of seat adjustments.

Kumar says: "The caste factor decided things in Uttar Pradesh in 2017 also. After it was decided that Yogi Adityanath [a Thakur caste leader] would be made chief minister, the BJP struck a balance by making two deputy chief ministers — one Maurya [OBC] and another Dilip Sharma [a Brahmin]."

West Bengal-based educationist Ramakant Shanyal says caste games are more open in Uttar Pradesh "but we have similar problems in so-called advanced states such as Gujarat and Karnataka as well."

However, in West Bengal, perhaps due to leftist influence, these factors are latent or not spoken about much politically. But in the social context when it comes to marriage and such issues, even in Bengal, caste factors come into play even among the educated.

Dalit Christians across the nation time and again have protested that they do not get the right representation and respect even in Vatican-run churches.

In July 2021, Dalit Christians staged a protest in front of the District Collector’s Office in Salem in Tamil Nadu ahead of the consecration of the new bishop, Arulselvam Rayappan.

The protest organized by the Dalit Christian Liberation Movement condemned the "untouchability" practiced by the Catholic hierarchy in India, particularly in Tamil Nadu and Pondicherry.

LADISLAUS LOUIS D'SOUZA
Put more succinctly, Caste Politics essentially means not so much that Indian democracy is yet to mature but that it has so matured that the politicians per say have emerged both a CASTE and a CLASS by themselves, and essentially a CASTE & CLASS that needs to be eliminated by hook or by crook if not by the power of the ballot. The reason for such elimination is that HATE has begun to not merely surface but rise to boiling point to no viable purpose other than to ensure the formation of the HINDU RASHTRA in India. If the world community and the world media have not yet grasped this reality and the dangerous level of its significance, democracy in India is doomed to fail, deteriorating into mobocracy or, rather, Hindocracy.
Reply

FRANCIS LOBO
If we say caste politics then we are having Dalit Christians even after conversion ? Why Dalit Christian have not give high post in Hierarchy of Christians? Where is equality in our Christianity ? Why nuns are not given any positions in our systems