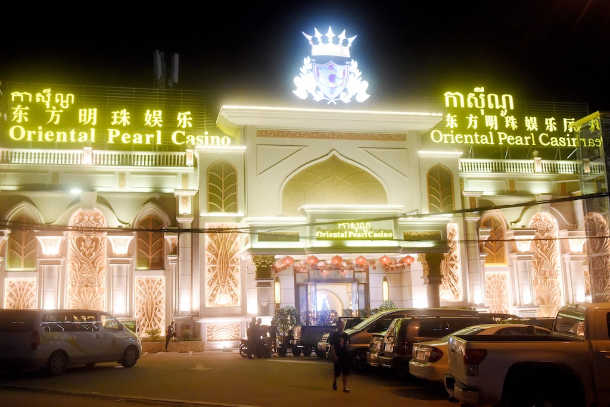 A Chinese-owned casino in the Cambodian resort of Sihanoukville. More than 7,000 Cambodians have lost their jobs and dozens of casinos have been closed since a ban on online gambling was introduced in August. (Photo: Tang Chhin Sothy/AFP)

Casino workers in Phnom Penh will go on strike next week in a rare protest in authoritarian Cambodia — and their demands for a higher minimum wage are likely to set a precedent for poorly paid workers across the country amid an ever-widening wealth gap.

Workers at Phnom Penh’s NagaWorld casino, which enjoys a monopoly on gambling within a 200-kilometer exclusivity zone around the capital, have told management they will strike on Jan. 9 in support of six demands.

They include a higher minimum wage starting at US$300 per month for hotel staff and US$500 for those working the gambling floor. Staff are also demanding the reinstatement of union president Chhim Sithar, who was suspended for defending a worker carrying a T-shirt that was printed as part of the union’s campaign for a living wage.

Talks between Naga and the Khmer Employees’ Labour Rights Support Union of NagaWorld have failed to resolve the dispute despite mediation by Cambodia’s Labor Ministry.

Hotel workers are currently paid between US$191 and US$230, while gambling staff receive between US$230 and US$370.

About 4,000 of 8,700 workers are part of the union in a casino owned by Chen Lip Keong, a Malaysian whose worth has been estimated by Forbes magazine at US$6.3 billion.

“If 4,000 workers go on strike for a week, the company will lose a lot of income,” Khun Tharo, project coordinator for labor rights group Central, told news portal CamboJA News. “They [seem] afraid of union empowerment.”

NagaCorp recently announced a US$4 billion expansion through its Naga 3 extension following a US$390 million profit in 2018, up 53 percent year on year.

Chhim Sithar was suspended after printing T-shirts with a Khmer slogan that translates to “The company is growing; workers need living wages.”

She distributed them to 3,000 employees but was suspended along with 27 other employers when security guards attempted to confiscate a T-shirt from an employee. She was told the T-shirts could damage Naga’s image and that it had violated internal policies.

The 27 others were reinstated but Chhim Sithar told Voice of Democracy: “Suspending from work a union leader who represents thousands of workers is serious discrimination against unions by the NagaWorld company.”

Strikes have become rarer in Cambodia since elections in July 2018 when the main political opposition party was banned and the Cambodian People’s Party won every seat in parliament amid an international outcry, particularly in the West.

As a result, the United States is now threatening sanctions and the European Union is considering the withdrawal of trade preferences.

More than 7,000 Cambodians have lost their jobs and dozens of casinos have been shuttered since a ban on online gambling was introduced in August, with more losses expected when the government has completed inspections.

The southern resort of Sihanoukville has emerged as a center for gambling and many of the dozens of Chinese-run casinos there have online gambling operations.

Prime Minister Hun Sen said this week that he would make the online gambling ban permanent and claimed that the industry had been used by foreign criminals to extort money.