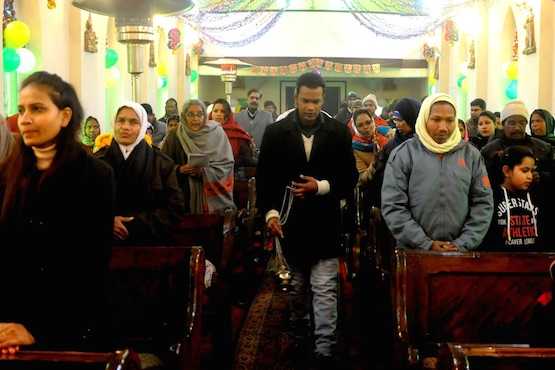 Christians pray during Christmas Mass at a Srinagar parish church. Most of the Jammu and Kashmir state’s 35,000 Christians are from poor a background and say they are most hit by India’s cash crunch following the government's decision to withdraw high vale bank notes. (Photo by Umer Asif)

"It is not even 20 percent of what I used to earn before. Even my regular customers seldom buy anything from my stall," she says while sitting on the side of a road with her vegetable basket.

Although more banknotes are printed, even after two months ATMs continue to shut down and long queues wait at those functioning because of withdrawal limits.

The situation has only worsened with each passing day, Massi said. "I do not have an ATM card and my children are too young to start a bank account. The truth is that I have only a few rupees with me and if the situation remains the same, my family will starve," she said.

Almost half of India’s 1.2 billion people are like Massi and don’t have a bank account, while over 40 percent of existing accounts are dormant, stressing the Indian economy’s dependence on cash transactions.

The hardest hit are ordinary laborers and unskilled workers. They constitute the majority of the 35,000 Christians in the Muslim majority Jammu-Kashmir state, which has a population of 13 million. The least talked about community in the state is made up of of daily wage carpenters, painters, masons and unskilled laborers.

The cash crunch has left the community rattled in a state already marred by political uncertainties and secessionist violence, as groups of Muslims continue to fight to secede from Indian rule or join neighboring Pakistan.

Jacob Disalva, a painter and Christian, said he was hoping for normalcy to return to Kashmir after five months of violence following the shooting death of secessionist leader Burhan Wani by Indian forces.

"Although the violence has ended, I’m still without work. For almost five months, along with my family, I’ve stayed inside. There was no work. Even now, I am sitting idle," Disalva told ucanews.com.

As cash flow shrinks, "people are spending only on bare necessities. Painting and renovation are not priorities now," Disalva said.

"Believe me, I am borrowing money from friends to keep the pot boiling at home. I pray to God that all this ends soon," he said, explaining the struggle to feed his wife and two little daughters.

Sareena Thomas, who works as housemaid, has barely had five days work since the withdrawal of banknotes was announced.

Doing household chores at different homes, Sareena used to make 500 rupees a day. "But now, I get a refusal every time I ask for work. The cash crunch is the reason," she said.

A mother of two, Sareena says her husband, a laborer, is facing the same problem. "Our savings have dried up and we are finding it hard to even purchase essential house hold commodities," Sareena said.

For carpenter Joseph Thomas, the banknote ban has "come as a curse. I used to earn 600 a day. My daily income has drastically come down to 100 a day, when there is work," Thomas said.

"I have to sustain my family. I have old parents, a wife and three kids. I am even ready to work on any meagre sum so that my family doesn’t sleep with empty stomachs," Thomas told ucanews.com.

Their parish priest, Father Roy Mathews of Srinagar parish, said the cash crunch has rendered many of his parishioners jobless.

"After five months of unrest, the people of Kashmir were already perturbed. The note ban has now led to a cash crisis, which directly affects the labor class in society," Father Roy told ucanews.com.