A Caritas volunteer used a microphone to warn flood-affected people against camping on the banks of the flooded Chenab River in Pakistan’s Punjab province.

“Everybody listen to this important announcement. People in mud settlements living near the river should reach a safer place. A huge wave is coming. Take your women, children, elderly and others to higher ground,” Saifullah of Caritas Pakistan Faisalabad announced.

He used a rope and an iron pan to rescue children in flooded streams around his village.

The locals appreciated his efforts. “Thank you, Caritas Pakistan and its volunteers, for saving little children! We were trying to reach a safer place. The floods are here. Our houses have caved in,” said a farmer from Chak Syalinj.

“Everybody is evacuating carrying whatever they can. We are trying to find fodder for the livestock. There was no announcement by the government.” 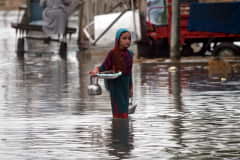 In Karachi, Caritas Pakistan volunteers of DMC Shehbaz Goth rescued people with the help of the Pakistan army. These included a child trapped in an underwater swamp. Caritas had earlier provided them with emergency kits.

Executive secretary Mansha Noor led his team in relief efforts in the Shahbaz Goth area of St. Thomas’s Parish of the Archdiocese of Karachi.

The objective of distributing tarpaulin sheets was to provide temporary shelter amid a pause in the rain. The heavy rain has downed power lines, causing widespread outages and leaving many people without electricity and mobile phone services.

At least 176 people have died and hundreds have been injured in the flash floods in Pakistan from June 15 to Aug. 1, according to figures released by the National Disaster Management Authority (NDMA) on Aug. 31.

A total of 88 medical, food and relief camps have been set up in the port city of Karachi, which has been ravaged by the record-breaking spell of monsoon rain.

According to the NDMA, more than 8,400 people have been evacuated in Karachi, including 175 families (1,245 individuals) who were helped by troops and civil administration from Yousaf Goth, Sarjani Town and Goths. Similarly, 299 people were evacuated using 10 boats in Sindh city of Dadu.

The NDMA has warned of further flooding this week.