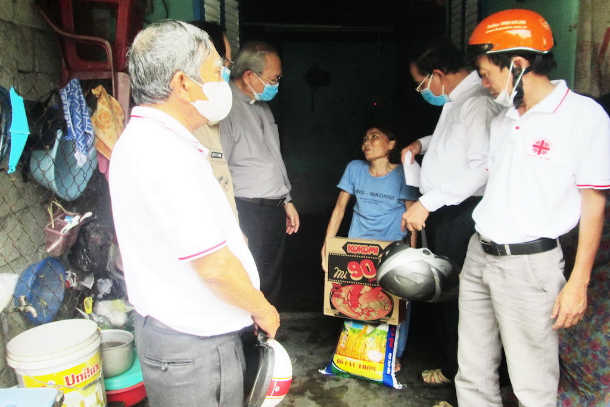 Caritas workers in central Vietnam have consoled those who are badly affected by the Covid-19 pandemic with humanitarian aid.

“Caritas has supplied each parish with 500 kilograms of rice so as to immediately help families facing lack of food, regardless of their background,” Father Ha said.

The 170-year-old archdiocese has 90 parishes in the two provinces of Quang Tri and Thua Thien Hue.

Father Ha said many poor families, especially motorbike taxi drivers, vendors and daily earners, have no jobs and lack food due to the government’s anti-coronavirus measures, which could be extended to the end of this month.

He was moved by a pale and thin woman who works hard all day to look after her three ailing elderly brothers. The priest said Catholics should reach out and help those in need during the pandemic.

Since April 16, Archbishop Joseph Nguyen Chi Linh of Hue and Caritas workers have carried rice and instant noodles on motorbikes and offered them to people in need in Hue City.

On April 17, Father Ha gave instant noodles, 50 kilograms of rice and 1.5 million dong (US$64) to Ton Nu Kim Chi, an 85-year-old Buddhist. “We would like to give you this love gift so that you can overcome this difficult time,” he told Chi.

Chi and her 10 other family members live in a 40-square-meter tumbledown house. One of her children suffers complete paralysis of his body while others drive taxi motorbikes or sell food on the streets for a living.

One of her sons, Nguyen Van Nam, 48, said they have lost jobs since the government launched a national lockdown to stem the pandemic on April 1. “My wife has asked for rice from others to put food on the table,” he said.

Tran Thi Thu, a Buddhist recipient, said she was grateful to Catholics for giving her food. The 46-year-old vendor said she could only spend 25,000 dong (US$1.07) buying fish for one week. In the past she made 50,000 dong a day from selling peanuts.

Many local Catholics support the campaign by supplying rice to poor people. Others volunteer to carry food on motorbikes to families.

Lang Co Parish said volunteers have offered 500 gifts to elderly people without relatives and families who are affected by the Covid-19 pandemic. Some families generously give up their gifts to those who need them more, while others donate rice to the poor.

Joseph Nguyen Van Hoang from Phu Cam Parish said he and eight others saved 7.5 million dong from their daily expenses during Lent and bought rice.

“We carried rice on motorbikes to give to 30 families in the districts of Huong Tra and Phu Loc,” the 72-year-old man said.

Marie Le Thi Huong from La Vang Parish in Quang Tri province said she bought two tonnes of rice to give to 100 families of other faiths. The recipients sold flowers, collected used items and asked pilgrims for food and money at the national shrine of Our Lady of La Vang, which is closed for the coronavirus outbreak.

As of April 19, Vietnam had reported 268 confirmed Covid-19 cases, of which 207 had recovered. The Southeast Asian country reported no new cases in the three latest days.