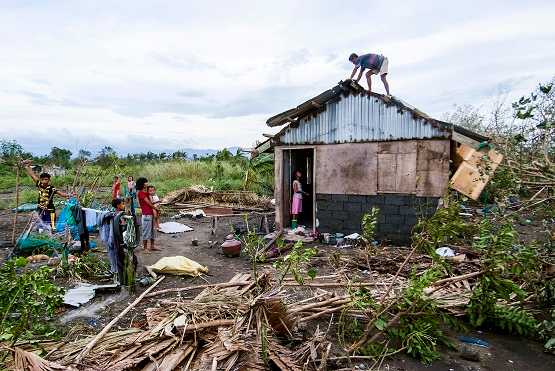 A family tries to salvage what was left of their home after Super Typhoon Haima hit the northern Philippine region of Cagayan. (Photo by Angie de Silva)

Father Edwin Gariguez, head of Caritas Philippines, said at least US$41,000 was initially allocated to support the immediate needs of affected families in four northern regions.

The priest said "bigger needs" are expected in the coming days as data from an ongoing "rapid needs assessment" conducted by Caritas networks are yet to be consolidated.

Caritas Philippines has partnered with the United Nations Office for the Coordination of Humanitarian Affairs and SkyEye to provide aerial footage of affected areas to help response actions.

The day after the storm hit the country, teams from the Catholic Relief Services of the United States were also deployed to conduct damage assessment.

The storm made landfall in the Cagayan area on Oct. 19, killing at least 13 and forcing the evacuation of hundreds of thousands of people.

"Caritas Philippines is directing the overall coordination with the social action network of the dioceses, and international Caritas confederation," said Gariguez.

Father Augustus Calubaguib, head of the social action ministry of Tuguegarao Diocese, said emergency funds have already been distributed to parishes and communities.

"We want to reach out to everyone who needs help, especially those in far-flung villages," said Father Calubaguib.

The priest said although there were not a large number of casualties, damage to infrastructure, agriculture, and people’s livelihoods "had to be addressed urgently."

"As always, our heartfelt thanks to the Caritas family that works side by side with us in bringing humanitarian aid to Filipinos," said Father Gariguez.

The government's National Disaster Risk Reduction and Management Council announced that it will start "recovery and rehabilitation" efforts in areas affected by the typhoon.

Romina Marasigan, the council's spokeswoman, said the agency is crafting a comprehensive rehabilitation and recovery plan.

In the meanwhile, Marasigan said authorities will put up temporary shelters for the homeless. The construction of permanent structures will come under the comprehensive plan.

At least 2,025 houses were destroyed and 11,941 others were damaged by Super Typhoon Haima in the northern regions of Ilocos, Cagayan Valley, Central Luzon, and Cordillera Administrative Region.

More than 350,000 people were affected by the storm with at least 75,000 still being housed in 552 evacuation centers, according to officials.